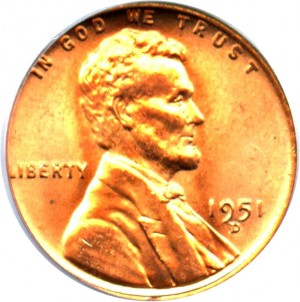 The Lincoln penny has been produced for an extended period of time, and is actually still in circulation to this day. Though the modern version of the penny does not excite too many people, older versions, such as the 1951 Lincoln, are highly sought after by collectors of all types. Their constantly increasing scarcity is something that shows you why now is as good a time as ever to get your hands on one of these coins.

The coin’s reverse features not an image in the center but, rather, two raised inscriptions. One of the inscriptions reads “United States of America” while the other marks the “One Cent” face value. Along the left and right outer edges you will see two single stalks of wheat, which is how the penny got its “Wheat Penny” nickname. Finally, arching overtop of the reverse is the Latin phrase “E Pluribus Unum.”

If you are talking about collectors, the biggest thing that must be taken into consideration is the condition a coin is in. No collector wants to get their hands on a worn, tattered Lincoln penny, and for this reason you will notice that most pieces have been graded. Below is an outline of the different coin grades as well as what they might mean in terms of the 1951 Lincoln’s appearance.

Uncirculated: If a coin is determined to be of Uncirculated grade, this means that it has never spent any time on the open market. Because the coin was never traded or exchanged, most of the damage associated with circulated coins will not be present. In fact, Uncirculated Lincoln pennies will be without flaw.

Extremely Fine: A 1951 Lincoln penny that is determined to be of Extremely Fine grade is one that was likely never circulated, but might have a small flaw or two. Though the damage on these Lincoln pennies is quite small and difficult to see with the naked eye, they do exist and are uncovered during the grading process.

Fine: A coin that is determined to be Fine was likely circulated for a bit of time. Having been exchanged on the open market for a number of years, these coins will show plenty of smoothing and scratching, but none of it will be severe enough to compromise any of the raised imagery or lettering.

Good: A 1951 Lincoln penny receiving a Good grade is one that was likely heavily circulated and heavily damaged as well. From deep scratches to the complete smoothing away of some of the raised imagery and lettering, these coins will show plenty of signs of their heavy circulation.