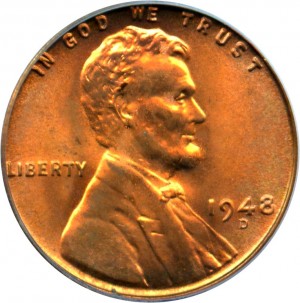 As far as US coins are concerned, there are few more identifiable than the Lincoln penny. Having been produced for more than 100 years, it is one of the most common coins found. For collectors, older versions of the Lincoln penny are highly sought after, and the 1948 Lincoln is one of those coins.

On the obverse side of the 1948 Lincoln you will find the detailed image of Abraham Lincoln in the center. To the right of the central image you will notice a raised inscription marking the 1948 year of minting. Opposite the date marking is a raised inscription which reads “Liberty.” Finally, the phrase “In God We Trust” is seen arching overtop.

On the coin’s reverse you will notice two inscriptions in the center. One of the inscriptions reads “United States of America” and the other marks the “One Cent” face value. On the left and right outer edges of the coin exist two stalks of wheat, which give the coin its “Wheat Penny” nickname. Finally, the Latin phrase “E Pluribus Unum” arches overtop.

For collectors, the condition of the 1948 Lincoln penny means everything. As a result, you will notice that collectors only want to get their hands on those pieces that have been professionally graded. Below exists an outline which touches on the different grades and explains what these grades mean for the Lincoln penny’s appearance.

Uncirculated: An Uncirculated coin is one that, from the moment it was minted, was put into safekeeping. Because they never spent any time on the open market, these pieces will be free from flaws. Though their color might have faded due to age, the physical qualities of the coin are perfect.

Extremely Fine: Extremely Fine Lincoln pennies might look perfect to the naked eye, but the grading process will reveal a flaw or two. These coins were likely never circulated, but somewhere along the way will have accrued a bit of damage.

Fine: A coin that is determined to be of Fine grade is one that was probably circulated, but likely not for a very extended period of time. As a result of this circulation, you will notice some light scratching and other minor flaws, but the coin will be in mostly great condition.

Good: Finally, there is Good. Good is the grade given to the coins that have been extremely heavily damaged due to years of circulation. From heavy scratching to the smoothing away of some of the raised imagery, these coins will have definitely seen their better days.

When it comes to the value of the 1948 Lincoln penny, this is something that depends upon the condition it is in as well as the type of coin it is. Because there were up to 3 different types of Lincoln pennies produced each year, the value will depend not only on its condition, but also its type. Below is a chart that will help you understand the values of different Lincoln pennies from 1948.