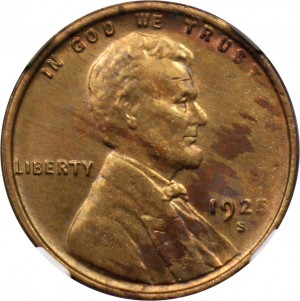 The Lincoln penny has been in circulation in one form or another for well over a century at this point. In fact, the coin is still in circulation today, though its design is a bit different today, the coin is an important piece of US history. For collectors, the 1925 Lincoln is highly sought after due to its age, its design, and its historical significance. No matter the coin’s condition, coin collectors will stop at nothing to get their hands on these coins.

As for the design, the coin’s obverse is not too dissimilar from what it looks like today. The center of the obverse side is marked by the profile of former President Abraham Lincoln. To the President’s left will be a raised inscription which reads “Liberty,” while the 1925 year of minting will be inscribed to his right. Arching over the top edge of the coin will be the raised words “In God We Trust.”

On the coin’s reverse, you will notice the “one cent” face value as well as another inscription which reads “United States of America” dominating the central aspect. To the right and left of these inscriptions will be two single wheat stalks. Finally, the Latin phrase “E Pluribus Unum” will be arching over the top of the coin’s reverse.

For collectors, having a 1925 Lincoln is not enough. For them, it is only the graded versions of these coins that are going to make it into a collection. For those who might now know, a graded coin is nothing more than one that has had its condition professionally assessed. In the following, we will present you with some of the different coin grades as well as what those grades will mean for the 1925 Lincoln penny.

Uncirculated: A coin that has been graded as being Uncirculated is one that spent no time exchanging hands. From the moment it was minted the penny was kept in safekeeping. As a result, these coins will show absolutely no damage and will appear just as they did the day they were minted. Of course, due to their age some of the color on the coin’s faces will have faded.

Extremely Fine: A coin that receives an Extremely Fine grade is one that might have a small imperfection, but will largely appear to be in perfect condition. In most cases, the imperfections seen on Extremely Fine coins are extremely small and difficult to notice with the naked eye. Nonetheless, they do still affect the coin’s value.

Fine: A coin that is given a Fine grade is one that spent a good bit of time in circulation, but did not accrue an incredible amount of damage during that time. For the 1925 Lincoln, you might notice some smoothing of the outer edges as well as some scratches. By most accounts, the damage and/or imperfections you will be able to notice are typical for a coin that has been circulated for a good bit of time.

Good: A coin receiving a Good grade was circulated for an overwhelming majority of its existence. These coins will show heavy damage that, at times, will be so bad that some of the raised inscriptions and imagery might be completely worn away. Still, these coins are rare and sought after by collectors despite their extreme wear.

Being that there were up to 3 different types of Lincoln pennies minted every year, the type of coin you have as well as the condition it is in will help you determine its value. The chart below will divide the coins by grade and type so that you have a better idea of exactly what you might be asked to pay for a 1925 Lincoln.