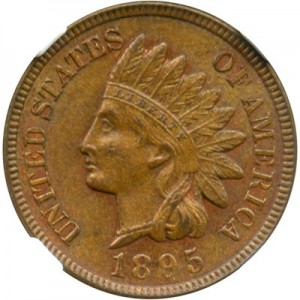 For any collector of American coinage, the Indian Head series is the best of the best, and also the most difficult to complete. The 1895 Indian Head is just one of many coins in the series, but is also a crucial part of any complete collection. Collectors will jump at the opportunity to get their hands on one of these coins, but will be even more ecstatic to get one in pristine condition.

Being more than 100 years old, it is understandable that it is quite difficult to find these coins in good shape, so it is even easier to understand why the price of well-preserved coins is as high as it is on occasion.

As far as judging the condition of the coin is concerned, this process is referred to as grading. Most often, grading is a process that is completed by a professional company that utilizes the opinion of experts. With the specifications below, however, you can attain a decent idea of what coins of a certain grade will look like.

Uncirculated: Uncirculated 1895 Indian Head Pennies are by far the most attractive in the eyes of the collector. These coins, throughout their 100+ year history, have been absolutely perfectly preserved and have no signs of wear. The coin’s imagery, including the wreath design on the reverse and Indian on the obverse, is perfectly visible and includes all of its original texture. Due to aging, some of the coin’s luster will have diminished.

Extremely Fine: An Extremely Fine Indian Head Penny is one that saw only a brief period of time in circulation. Still, because they exchanged hands, they will show some light signs of wear—typically some minor scratching. Still, the coin will have retained most of its texture and the imagery is still able to be made out without any trouble at all.

Fine: Fine is a grade given to Indian Heads who saw a decent amount of time exchanging hands across the United States. They will show heavy signs of wear, but not so much that the images and inscriptions are difficult to make out with the naked eye.

Good: 1895 Indian Heads that have been heavily circulated are typically graded as being Good. These coins are scratched, chipped, and generally beaten up due to spending decades changing hands. The coin’s faces will now be lacking all texture to the point where they are quite smooth.

For any coin as old as the 1895 Indian Head Penny, the price you are going to pay will directly correlate with the condition of the coin. Though some earlier editions of the Indian Head see their price rise to inconceivable levels as the condition improves, the 1895 version remains generally affordable across all grades. Below you will find a chart that will help you understand what the common asking prices are for these coins across various grades.