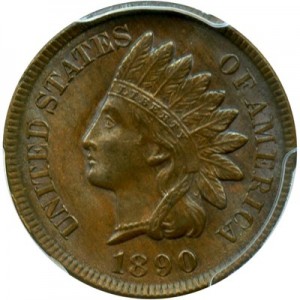 The 1890 Indian Head Penny is a hot-ticket item for any collector looking to put together a complete collection of these pennies. Though well over 100 years old, plenty of these coins still exist and are able to be purchased. Unfortunately, while it is easy to find these coins for sale, it is not such a simple endeavor to find them in pristine condition. Because of this, collectors are willing to pay top-dollar for an 1890 Indian Head in above average condition.

Despite the age of these coins, there are quite a few remaining. Compared to Indian Heads from the 1870s and 1860s, many are still around and able to be purchased by collectors.

When it comes to judging the condition of coins as old as the 1890 Indian Head, the official way of doing so is giving the coin in question a grade. Typically, grading is executed by professional services, but anyone with eyes is able to assess the condition of a coin and give it a rough grade.

By using the specifications provided below, you can attain a good idea of what a coin of a certain grade will look like. Of course, in order to receive an official grade it is necessary that you send your coin away for professional grading.

Uncirculated: Coins deserving of this grade are those that were never exchanged. Instead of being used to purchase goods and pay for debts, these coins were kept in a safe place throughout the entirety of their existence. As such, they will show no signs of wear and will have maintained all of their original texture and imagery. The only flaw is the fact that some of the mint’s original luster will have worn away with the years.

Extremely Fine: An Extremely Fine 1890 Indian Head is one that saw a limited amount of time exchanging hands. While some signs of wear, such as scratching, will be seen, the coin itself is in mostly pristine condition. Coins this well-preserved are quite difficult to find.

Fine: Fine is a grade given to coins that saw a decent amount of time in circulation. Because the 1890 Indian Head was minted much later than many other editions of the coin, it is not so uncommon to find lightly circulated, Good Indian Heads from this year.

Good: Coins deserving of this grade are the ones that were circulated more than any other. Plenty of scratching and other signs of wear will be present and much of the raised aspects of the coin will have been smoothed over the years due to the changing of hands. As seen by their lower prices, Good 1890 Indian Heads are not so rare.