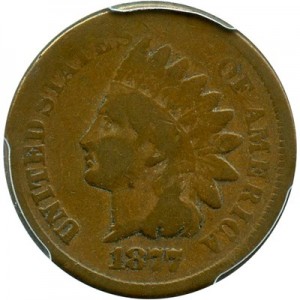 As time moves forward, these particular coins will be even more difficult to find as what few remain are being readily purchased by collectors who are eager to complete their collections.

Giving a coin a grade is nothing more than strictly defining the condition of your coin. Because coins this old are so incredibly difficult to find, condition plays a huge role in determining value; as does their inherent rarity. Grading a coin typically involves sending it away to a professional grading service, but by utilizing the chart below you can get a rough idea of what the condition of certain graded Indian Heads is.

Uncirculated: Uncirculated 1877 Indian Head Pennies are next to impossible to find. Though they do exist, these coins are found few and far between and carry an exorbitant price. The condition of an Uncirculated coin is that of a coin that was immediately taken off the production line and put into a safe place.

Extremely Fine: Extremely Fine 1877 Indian Heads are also quite difficult to find. These coins will show some signs of wear, but unless you are closely examining the coin’s faces, it will be hard to decipher. What is a big giveaway that this is an EF coin and not an Uncirculated one is the fact that much of the mint’s original luster has faded away over time.

Fine: Though the condition may be a bit rougher, Fine 1877 Indian Heads are still a prize in the eyes of collectors. These coins will show significant signs of wear and will see much of the texture worn down from years of exchanging hands. Still, you are able to quickly and easily make out the imagery and inscriptions on the coin.

Good: Though this is the most commonly found type of 1877 that does not at all mean they are easy to find. Good coins have seen many decades of circulation and will have much of the imagery and inscription worn down over time. To the touch, the coin’s face will appear smoother than what you might expect; this is due to the exchange of hands over the years.

No matter what the grade of your 1877 Indian Head, you can rest-assured knowing you will get quite the sum of money for it. Even in terrible condition these coins are worth a lot, but in Uncirculated condition, these coins are worth significantly more. The chart below will give you a good idea of what you can expect to pay for an Indian Head Penny from 1877, given its grade.