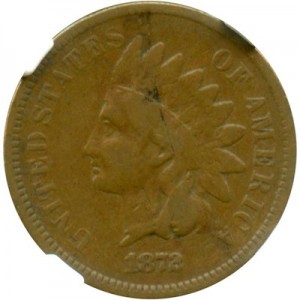 Like most Indian Head Pennies from the early 1870s, the 1872 edition is valuable for no reason other than the fact that so few have survived the years. Even in awful condition this year’s Indian Head is extremely valuable and a must-have for anyone who is looking to collect this type of coin. Unfortunately, so few coins have made it through to today that you will more often than not find the 1872 in poor condition.

With coins this old, the best way to determine value is by finding out what its grade is. Typically, in order to determine a coin’s official grade is by sending it away to a professional grading service where experts will carefully examine your coin’s condition and give it a grade. For those that would just like to more accurately determine the grade and value of their coin(s), you can use the specifications provided below.

Uncirculated: An Uncirculated 1872 Indian Head is almost impossible to find at this point in time. These coins never exchanged hands and were put into safekeeping almost immediately after being minted. All of the texture and imagery is present and intact, and the coin’s face has retained most of its original shine. For one of these coins, expect to pay top-dollar.

Extremely Fine: Just one step down from Uncirculated, an Extremely Fine Indian Head will have retained most of the texture. On this coin, you can easily identify the Indian on the front of the coin as well as the wreath and inscriptions on the back. Though it may appear a bit dull, the coin will not show much sign of wear and tear.

Fine: Fine coins will have some scratching as well as some noticeable wear, but much of the imagery can be made out. Still, the overall texture of the coin will have been worn down because of years of circulation. These coins are quite dull, but are still in decent shape when all things considered.

Good: The most commonly found type of 1872 Indian Head, coins in Good condition will show significant signs of wear and tear. The imagery will just barely be able to be made out and the texture of the coin will have been worn down almost entirely.

As is the case with almost every Indian Head Penny, the value of the coin will be directly determined by the condition your coin is in. Despite the fact that most coins are found today in poor condition, any coin found in decent condition will naturally carry a higher price tag. Like other early 1870s Indian Heads, there are two different versions of the coin—one that has a shallow, thin “n” in the “One Cent” inscription, and one that has a bold “n.” By using the chart below you can determine how much you can expect to pay for an 1872 Indian Head given its grade.