Celebrate with American Silver this 4th of July

Celebrate with American Silver this 4th of July

The 4th of July is one of, if not the most, important dates on the calendar each year for Americans. 246 years ago, the thirteen colonies of British North America declared their independence from the British Crown and the despotic rule of King George III. In drafting the Declaration of Independence in 1776, the Founding Fathers declared that the thirteen colonies were united, free, and independent states intent on forming a new nation. The Continental Congress adopted the Declaration of Independence on July 4, 1776, a date the nation now recognizes as its Independence Day. As you gather to celebrate with family and friends this 4th of July, consider gifting your fellow freedom lovers with American silver bullion. 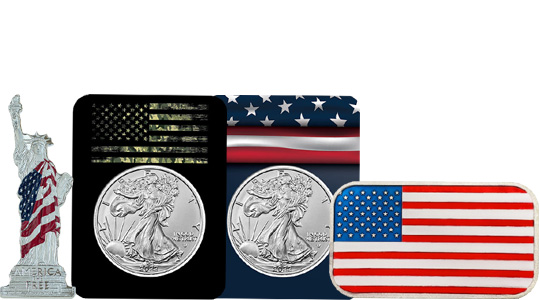 It wouldn’t be the 4th of July without the American Silver Eagle coin. The official silver bullion coin of the United States, the Silver Eagle offers one of the most beautiful images of Liberty ever struck on an American coin. The Walking Liberty design on the obverse of these coins was created in 1916 by Adolph A. Weinman and shows Liberty in left-profile relief. She walks toward the sun on the horizon with her right hand extended as her left carries branches of oak and laurel, symbols of America’s civic and military prowess. Wrapped around the figure of Liberty is the American flag.

Now, it wouldn’t be a 4th of July celebration at JM Bullion if we didn’t offer you several options for the American Silver Eagle. There are three main choices for those looking to celebrate the Stars and Stripes this 4th of July:

Each one of these options offers you something unique. The two Special Occasion Series coins offer an American Silver Eagle sealed in a clamshell card. The American Flag Card has the beautiful colors of the Stars and Stripes, while the Black Camo Card offers a distinctive military-themed twist on the flag. The Certified 2020 (P) Silver Eagle was part of the Philadelphia Mint’s emergency issue of Silver Eagles during the early stages of the COVID-19 pandemic. Each coin is sealed in a plastic slab and comes with an American Flag label inside.

What’s better than a silver bar with the image of the American flag? A silver American flag bar designed and produced by an American mint. SilverTowne Mint, a private facility in Indiana, issues the American Flag Silver Bar with a common design element and various options. Each bar in the series offers a landscape orientation for its primary obverse design element. Here, you will find the image of the Stars and Stripes. The accurate design includes the square field of 50 stars and the 13 stripes of Old Glory.

In the most visually brilliant option in this series, SilverTowne offers a 1 oz Colorized American Flag Silver Bar. This bright specimen offers a stunning field of blue with the 50 white stars. This is accompanied by the 13 red-and-white stripes honoring the original Thirteen Colonies. In total, this series offers:

Other Symbols of America

Beyond American-made silver bullion, there are options from other manufacturers that celebrate the freedom and independence of the United States of America. Few options available in 2022 are more beautiful than the 2022 2 oz Colorized Solomon Islands Silver Statue of Liberty Coin. This shaped silver coin offers a reverse design and overall shape based on the brilliant image of the Statue of Liberty. While Liberty’s figure is captured in brilliant silver, her figure is also wrapped in the stunning red, white, and blue of the American flag.

Although the fight for freedom and independence from British tyranny began in 1775 and would run through 1783, the broader American Revolution wasn’t settled until 1791 following the adoption of the Constitution of the United States of America in 1789. However, it is the Declaration of Independence that Americans look to as the important document signaling the intent of the colonists to pursue a brighter future. Adopted by the Second Continental Congress on July 4, 1776, this document marked the formal intent of the colonies to pursue freedom at any cost. Today, Americans pause on this federal holiday to set aside differences and remember what makes us all free and independent Americans.

Honor America this 4th of July with American-themed Silver Bullion!

Now’s your chance to snag some American-themed bullion products, from the sovereign US Mint and private American mints to products from other manufacturers, you’ll find several options. JM Bullion customer service is here to help answer your questions. Please feel free to call us at 800-276-6508, chat with us live online, or simply send us an email. Remember to follow us on Facebook and read our blog each week for exciting new information.