Australia has a deep connection to gold that is unlike anywhere else in the world. According to Australia’s government, the nation holds more gold reserves than any other individual country and is the second-largest annual producer of gold. It should come as no surprise then that the continent has seen countless gold rushes over the last 160-plus years and is home to some of the finest gold coins for sale today, most coming from the Perth Mint of Western Australia.

In honor of the 150th anniversary of the discovery of the largest gold nugget in Australian history, the Perth Mint has released two impressive coins with an exact depiction of the specimen on the reverse side of bullion coinage. Available in both gold and silver, the new Welcome Stranger Gold Nugget coins are a true nod to the history of mining in Australia. 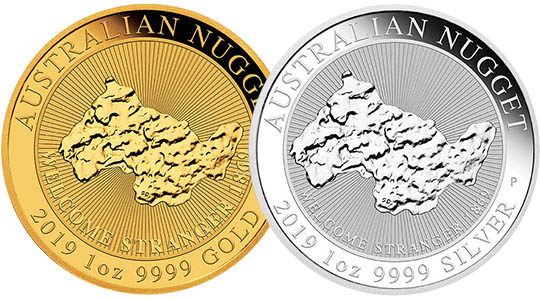 Australia’s Perth Mint offers the 2019 Australian Gold Nugget Coin in two different options, but both coins share the same obverse and reverse design elements. The 2019 1 oz Australian Gold Nugget Coin is available with 1 Troy oz of .9999 pure gold in BU condition. These coins ship individually inside of protective plastic capsules, come with a mintage limited of just 7,500 coins, and have a face value of $100 (AUD).

Additionally, the Perth Mint offers the same beautiful design on the 2019 1 oz Australian Silver Nugget Coin. This product is available with 1 Troy oz of .9999 pure silver in BU condition, a face value of $1 (AUD), and also ships individually inside of a protective plastic capsule. The silver coins have a slightly higher mintage cap of just 30,000 in total.

On the reverse of side of the 2019 Welcome Stranger Gold Nugget Coins is the image of the famed gold nugget discovered in 1869. The massive specimen weighed a total of 66 kilograms and was discovered in Bulldog Gully near Moliagul, Victoria. This side of the coins includes a background for the design field that boasts radial lines. Within the inner design field, there is an inscription of “Welcome Stranger 1869.” The outer design edge features “Australian Nugget” above and the date mark, weight, metal purity, and metal content below.

The obverse of the coins includes the new sixth-generation effigy of Queen Elizabeth II to feature on Australian coins. Introduced on British coinage in 2016, Jody Clark’s design for the Royal Mint depicts Her Majesty in right-profile relief wearing the Royal Diadem crown on her head. For the first time since 1966 on an Australian coin, and in a departure from Clark’s Royal Mint design, this portrait includes the Queen’s neckline and shoulders, which includes the Victorian coronation necklace. This side of the coin has inscriptions of “Elizabeth II,” “Australia,” and the face value in Australian dollars.

History of the Welcome Stranger Nugget

Australia’s first gold rushes occurred beginning in 1851, but unlike the California Gold Rush in America, there would be a consistent variety of gold rushes in the western reaches of Australia over the course of the next seven decades as more and more deposits were discovered. Gold had been found in small deposits in Victoria as early as 1841, but an increasing number of deposits were discovered starting in 1848. The Pyrenees Ranges saw a sustained gold rush from 1848 to 1850. Subsequent gold rushes in Victoria alone included those in Woady Yaloak River (1849), Clunes (1850), and Castlemaine district and Clunes (1851), just to name a few. One of the gold finds that occurred in Victoria in 1869 garnered major national headlines.

On February 5, 1869, a Cornish miner by the name of John Deason was working near Bulldog Gully in Victoria when he discovered something at the base of a tree. There, just 3cm underneath the topsoil, was a gold nugget. He had no way of knowing in that moment exactly how big it was, but he recovered it and returned under the darkness of night with Richard Oates to dig it out.

What the duo had found was then the world’s largest-known gold nugget. When it had been fully unearthed, the pair was in possession of a 66 kilogram gold nugget that had to broken on anvil at the bank before it could fit on the scales to be weighed. Known as the Welcome Stranger Gold Nugget, the specimen was worth roughly 10,000 pounds at the time, or the equivalent of $3 to $4 (AUD) in today’s money.

Both the silver and gold bullion options in the 2019 Gold Nugget Coin release from Perth Mint are available now for purchase. You can contact our customer service team at 800-276-6508 with any questions, or connect with us online through our live chat and email address features. You can also follow us on Facebook and visit the blog each week for exciting new feature pieces.