Celebrate 80 Years of Hijinks with a Tom & Jerry Round

When it comes to buying silver online at JM Bullion, you will find that there are more choices than just silver bullion coins and silver bullion bars. Silver rounds make up a significant component of our online offerings, and you will find that the designs gracing silver rounds are as diverse as any bullion coin program in the world. One of the latest examples of this comes from the Royal Dutch Mint and its celebratory Tom & Jerry Silver Round. 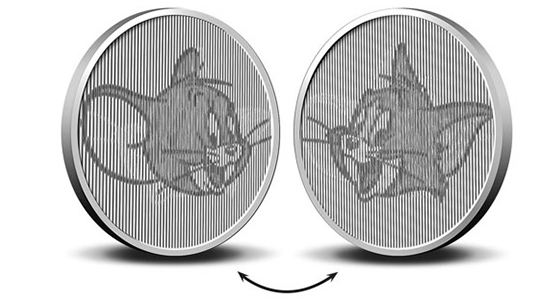 The all-new 1 oz Tom & Jerry 80th Anniversary Silver Round from the Royal Dutch Mint features a unique obverse design element. The lenticular design of this round comes with two images in one field. As you rotate the round in your hand, you will see that the design alternates between the image of the mouse named Jerry or the cat named Tom. Jerry is shown in right-profile relief, while Tom is shown in left-profile relief.

On the reverse side of the Tom & Jerry 80th Anniversary Silver Round, the mint offers a commemorative design honoring the 80-year history of the franchise. In the design field, you will notice the large number 80 at the center, with the playful Tom and Jerry figures chasing one another through the numbers. The figures of Tom and Jerry are shown only as silhouettes in this design. The name of the original Tom & Jerry series appears at the top of the round’s design field, with the weight, purity, metal content, and copyright information included.

The cat-and-mouse duo known as Tom & jerry debuted as a series of short films in 1940. The creatures, William Hanna and Joseph Barbera were the creators of the franchise and developed a total of 114 animated shorts for MGM between 1940 and 1958. In total, some 161 theatrical short films featuring the playful cat and mouse have been produced over the decades, with the characters also appearing in a variety of TV series and other forms of media.

The key to any good Tom & Jerry short is the intense rivalry between the two figures. Always seemingly playful, the comedic value of the scenes was enhanced with the use of music and sound effects.

Tom & Jerry 80th Anniversary Silver Rounds are available to you courtesy of the Royal Dutch Mint. Each round comes with a plastic capsule for delivery. The Royal Dutch Mint of the 21st century can trace its roots back to 1567 and the formation of the Utrecht Mint. Based in Houten, the Netherlands, the Royal Dutch Mint began to take on its modern form in 1806 during the rule of King Louis Napoleon.

Celebrate the long history of everyone’s favorite cat-and-mouse duo with a fun silver round design. You can contact JM Bullion customer service at 800-276-6508, chat with us live online, or simply send us an email with your inquiries. Remember that you can follow us on Facebook for regular updates and check our blog each week for in-depth information on new and upcoming releases.