The beliefs of the Incan people take center stage in an impressive new silver coin release issued on behalf of the nation of Tuvalu. These beautiful coins with a domed central element offer up a glimpse of what the Incan people literally believed to be the Tears of the Moon, small bits of silver that rained down on the world when Mama Quilla, the goddess of the moon, cried. With limited mintage figures and exceptional packaging, your chances to own this new silver coin in JM Bullion’s world silver coin collection will be short-lived. Learn more about this new collectible silver piece in this week’s JM Bullion blog post. 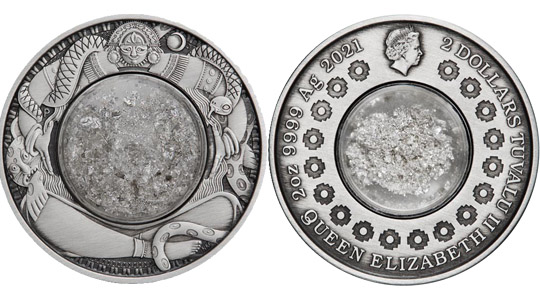 The first thing you are likely to notice about the new 2021 2 oz Antique Tears of the Moon Silver Coin from the Perth Mint is the clear, Perspex dome on the reverse and its flat, clear surface on the obverse. Within this dome are small particles of silver that are suspended within a pure mineral oil solution. This piece of the coin’s design is central to the Mama Quilla myth. The Incans believed that her tears were literal bits of silver that fell down upon the Earth. When you receive your Tears of the Moon Silver Coin, it arrives in a special presentation box. The box itself is shaped like the ancient Incan depictions of Mama Quilla and where her mouth would be, a pull-out drawer reveals the coin resting in a padded space.

Each coin in this new release has 2 Troy oz of .9999 pure silver content with an antique polish applied. The coins come with a numbered Certificate of Authenticity from the mint and are limited in mintage to just 2,500 coins in total.

On the obverse side of the 2021 Antique Tuvalu Tears of the Moon Silver Coin is the popular Ian Rank-Broadley effigy of Queen Elizabeth II. Because of the clear Perspex at the center of the coin’s physical design, the Queen’s effigy is located at the 12-o-clock position above the Perspex space. There is a special design element included around the central field of the obverse design. These small crosses are an Incan design and are known as chakana.

The reverse face of 2021 2 oz Antique Tears of the Moon Silver Coins comes with the domed Perspex surface. Here, you can see the silver particles move around while suspended in the pure mineral oil within. The design around the outer edge of the field depicts one of the common myths the Inca believed regarding Mama Quilla. In the design, Mama Quilla is under attack by a serpent-like beast. According to Incan mythology, lunar eclipses occurred because Mama Quilla was being attacked by a serpent or mountain lion. If you look closely at the design element around the edge of the field, you will see both a serpent and a mountain lion-like creature attacking Mama Quilla.

Who is Mama Quilla?

To the ancient people of the Incan Empire in South America, Mama Quilla was one of the most important mythological deities. She was considered by many to be the third most powerful deity. Her name translates as “Mother Moon” and in Incan mythology and religion, she was the goddess of the moon. She was also considered the goddess of marriage and a defender of women. The most important myth surrounding her existence revolved around the Moon. As the design of these coins suggests, the Inca believed that her tears were made of silver and those silver tears would rain down on the Earth when she cried. That silver could then be mined by the Inca. It was also believed that dark spots on the Moon were the result of a fox that fell in love with Mama Quilla. When the fox ascended to the Moon to be with her, she hugged the fox so tight its dark fur spots translated to dark spots on the Moon. As mentioned earlier, the Inca also believed lunar eclipses occurred because she was under attack.

Collect The Tears of the Moon While You Can

With only 2,500 silver coins available in this release, supplies won’t last long. Be sure to reach out to JM Bullion with any questions by calling us at 800-276-6508. We are also available to assist you online through our live chat and email address features. You can also follow us on social media for regular updates on new products and read our weekly blog posts for in-depth looks at upcoming releases.