Capture the Big Five All in One Coin Release

The African continent remains a place of wonder and splendor in the 21st century, with wide-open spaces and a wealth of wildlife. The continent is home to some of the largest and most ferocious predators known to mankind. Among them, the so-called Big Five represents the largest, most ferocious, and hardest animals to hunt. The term Big Five originated among hunters and pointed to the difficulty in capturing these animals, due in part to the danger each one posed to a human. A new silver coin for sale from the Republic of Chad showcases all five of these creatures with a beautiful high-relief, shaped silver blank. 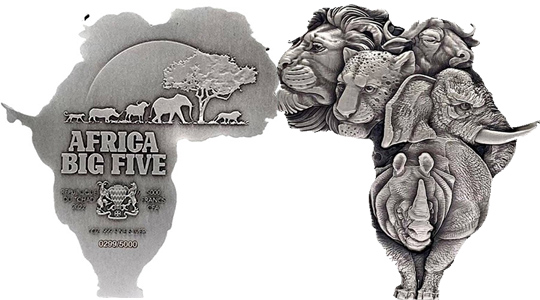 With the release of the 2022 1 oz Antique Republic of Chad Silver Big Five Shaped Coin, you will find a silver specimen that offers a variety of unique and beautiful visuals. First and foremost, this coin is shaped like the African continent. However, this shape is not created using a topographical or geopolitical map as its inspiration. Instead, the coin takes its shape through the combination of the faces of Africa’s famous Big Five creatures.

Each Republic of Chad Big Five Shaped Coin contains 1 Troy oz of .999 pure silver and comes with a legal tender face value of 5,000 Francs. The coins have a high-relief strike for the images of the Big Five creatures on the reverse, with an antique polish applied throughout the obverse and reverse fields. The coins are held in a custom-shaped capsule and offered in a presentation box with a photo collage on the cover capturing the images of each of the five animals. The coins in this release are limited to a total of only 5,000 coins. Finally, each coin has its unique serial number marked on the obverse.

On the obverse of the 2022 Antique Republic of Chad Silver Big Five Shaped Coin is a depiction of the Chadian coat of arms. This side of the coin is flat but does possess the antique polish as applied to both sides of the coin. The name of the series and the identifying hallmarks of the coin are engraved on this side, including the unique serial number out of 5,000 in the release. The top of the coin field features the image of the five animals walking in a line along the savanna as the sun looms large in the background.

The reverse field of the 2022 1 oz Antique Silver Big Five Shaped Coin offers a stirring design. Here, the images of the African elephant, African lion, Cape Buffalo, leopard, and rhinoceros come together to form the African continent. Each animal is captured in a beautiful high-relief strike that delivers a 3D effect for the design.

When the term Big Five is used, it refers to the largest and most powerful animal species on the African continent. Not all of these animals pose a direct threat to humans. In fact, most of these animals face extinction and threats to their natural habitat due to the expansion of people. The African bush elephant, for example, is the largest living land mammal in the world today and is targeted by poachers for the ivory in its tusks. Historically, the African lion and leopard were threats to humans trying to hunt for their own survival. Today, these animals are threatened with loss of habitat due to human expansion.

This limited-issue coin is now available from JM Bullion. If you have any questions for our team, please don’t hesitate to ask. Our customer service associates are available at 800-276-6508, online using our live chat, and via our email address. You can also follow us on Facebook for regular updates and read our weekly blog posts for a deeper look at new releases.