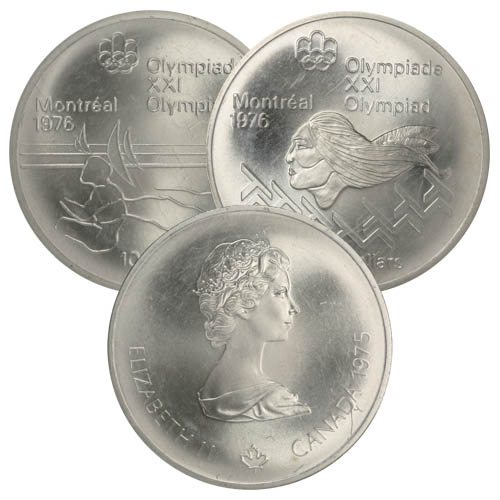 In 1976, the nation of Canada hosted the Olympics for the first time in its history. The 1976 Montreal Games was the 21st installment of the Summer Olympics and was funded, in part, in a very unique manner. The federal government of Canada directed the Royal Canadian Mint to issue silver and gold bullion coins to help raise funds to cover the expense of hosting the games. Now, 1976 Canadian $10 Olympic Silver Coins are available to you for purchase online from JM Bullion.

Montreal was awarded the 21st Summer Olympics in 1970 and the Canadian government under Prime Minister Pierre Elliott Trudeau ordered the Royal Canadian Mint to help raise funds through the issuance of silver bullion and gold bullion coins. The silver coins in this series offered $5 and $10 options on 28 releases with seven different design concepts.

On the obverse of all 1976 Canadian $10 Olympic Silver Coins is an effigy of Queen Elizabeth II. Her Majesty is featured here in a right-profile design created by Arnold Machin and captures the Queen at the age of 39. The coins include inscriptions of “Elizabeth II,” the maple leaf, “Canada,” and the date mark.

The reverse side of the coins include varying designs. Among the designs you could find on these coins include the four images offered on the 1976 $10 Silver Canadian coins. Possible options include Field Hockey and Soccer, as well as the Olympic Stadium and Olympic Velodrome.

These 1976 Canadian $10 Olympic Silver Coins are available to you with protective plastic flips. This listing offers the coins to you with varied designs. JM Bullion will select your coins at random when your payment has been processed and we cannot guarantee the images you’ll receive. We cannot hand-pick specific designs and when you buy more than one, we cannot hand-select different designs for various options.

We encourage JM Bullion customers to call us with questions at 800-276-6508 when buying silver. You can also reach out to us on the web using our live chat or email address.