Build Your Marvel Silver Coin Collection with the 2021 Wolverine Issue

In 2017, an ambitious series of Marvel Silver Coins debuted from the Perth Mint. The Marvel Series was originally planned to feature six designs, each one featuring a Marvel character to be released around the time of an upcoming feature film in the franchise. Due to the popularity of the low-mintage coins, the Perth Mint expanded the series beyond its original six. The collection now stands at nine in all with the release of the 2021 Wolverine Silver Coin. 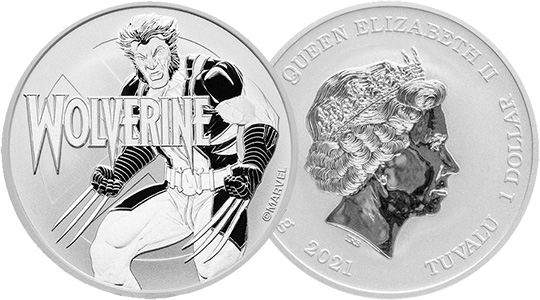 On the reverse side of 2021 1 oz Tuvalu Wolverine Marvel Series Silver Coins, you will find one of the original Marvel Comics depictions of Wolverine. He is shown in his traditional yellow-and-blue superhero suit, though it is not colorized in this release. His indestructible adamantium claws are exposed from both fists as he is clearly ready for a fight. Though he is depicted throughout Marvel Comics as a member of Alpha Flight, X-Men, and the Avengers, the background field features the circular seal with an “X” at its center representative of the X-Men.

The obverse face of all coins in the Marvel Series of silver bullion specimens features the same design element. Queen Elizabeth II features on the coins in the 1998 effigy of the Queen from Ian Rank-Broadley. This design is the fifth-generation effigy to feature on most Commonwealth coins from the South Pacific. Though Australia has moved on to a new sixth-generation design as of 2019/2020, releases from the Perth Mint for Tuvalu continue to feature the popular design from Ian Rank-Broadley more than two decades after it was initially developed.

As alluded to earlier, the 2021 Wolverine Silver release is the ninth in the long-running Marvel Series. The coins were primarily issued in the Brilliant Uncirculated condition. Each design is limited to 50,000 coins in total with dealers selling the coins individually or in bulk. When you purchase coins individually or in multiples of less than 20, each coin comes in a protective plastic flip. Multiples of 20 come in rolls from the mint, with boxes of 100 and 300 available as well. The box of 100 holds five rolls, while the box of 300 holds 15 rolls. The coins have 1 Troy oz of .9999 pure silver content with a face value of $1 (Tuvaluan dollar) backed by Tuvalu.

Background on the Character

Wolverine was one of the first fictional characters from Marvel Comics to debut as a tough antihero. The creation of Wolverine with this type of attitude and disposition reflected the popular culture in the United States in the years following the Vietnam War when conflicted people were common in TV and film. Wolverine’s personality is perfectly captured in his catchphrase from a four-part limited series from 1982 in which he says “I’m the best there is at what I do, but what I do best isn’t very nice.”

The Power of the Marvel Cinematic Universe

Marvel Comics has been dazzling readers for generations now, with many of its greatest characters debuting in the 1960s. The modern era has seen the formation of Marvel Cinematic Universe and the release of 23 feature films as of November 2020. Over the course of the franchise, the films have generated $22.56 billion (USD) at the worldwide box office, with each film averaging $980.5 million at the box office. The highest-grossing single film in the series is Avengers: Endgame, which grossed $2.8 billion globally.

Get Your 2021 Wolverine Coin from JM Bullion

Now is your chance to get the 2021 Wolverine Silver Coin before the remaining stock sells out. If you have any questions, please contact JM Bullion. Our customer service team can help you at 800-276-6508, online using our live chat, and via our email address. Remember to follow us on Facebook for daily and weekly posts, and read our weekly blog posts for more in-depth insight on recent or upcoming releases.