The Royal Mint’s British Silver Queen’s Beast and British Gold Queen’s Beast coins continue with the debut of the first 2020-dated design. The White Lion of Mortimer joins the collection as the eighth overall design and is the second that originates from the 15th-century reign of King Edward IV, England’s first Yorkist king. The bullion options in this series are available for presale right now and you can learn about the background story of this beast in this week’s blog post. 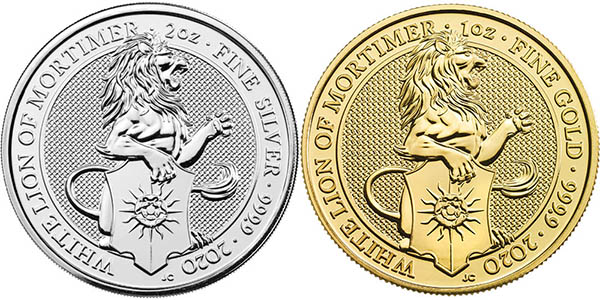 On the reverse side of the 2020 Queen’s Beast White Lion Coin, you will find the image of the White Lion of Mortimer. In this coin design from Jody Clark, the White Lion is shown as a more powerful animal. It is depicted standing on its hind legs with one forepaw raised in what is known as the rampant pose. The beast stands behind the Yorkist shield that bears a single rose in the center with sun rays emanating from behind its shape.

Traditionally, the White Lion of Mortimer was used by King Edward IV to support his Royal Arms. His White Lion was often depicted in a seated position, denoting a more docile beast. It often had its tail between its legs and, as in this design, never wore a crown. This helped differentiate the White Lion from the Lion of England.

The obverse side of 2020 Queen’s Beast White Lion Coins features Jody Clark’s fifth-generation portrait of Queen Elizabeth II. This right-profile portrait of Her Majesty depicts the Queen at the age of 89 wearing the Royal Diadem crown and earrings. The background field of the bullion coins in this series has the Royal Mint’s guilloche finish. This gives an appearance similar to braided rope and is a built-in security element to the design of Royal Mint coins. Proof coins do not have the guilloche background.

As it as throughout the series, the Royal Mint will later introduce two additional bullion options for the White Lion of Mortimer design. Investors can expect the 10 oz silver and 1 oz platinum bullion coins to eventually release in the months to come.

The Royal Mint will later release the 2020 Proof Queen’s Beast White Lion Coins in both silver and gold. The range of silver coins available include weights of 1 oz, 5 oz, 10 oz, and 1 Kilo. These coins are distinctive compared to the bullion counterparts in two ways. Proof Queen’s Beast Silver coins have frosted designs and mirrored background fields, with no guilloche background element. More importantly, while the bullion version is .9999 pure silver, the Proof Queen’s Beast Silver coins have .999 pure silver. Each coin is individually housed in a beautiful Royal Mint presentation case and comes with a Certificate of Authenticity. 1 Kilo silver proofs are housed in wooden display boxes.

The range of proof gold coins available in this series offers 1/4 oz, 1 oz, 5 oz, and 1 Kilo options for collectors. Like the silver coins, each one is individually housed inside of a protective display box. All of the proof gold coins come with a wooden display box and a Certificate of Authenticity. The Proof Queen’s Beast Gold Coins all have .9999 pure gold content.

History of the White Lion of Mortimer

As mentioned earlier, the White Lion of Mortimer is traditionally depicted supporting the Yorkist shield in a seated position with its tail between its legs. The shield itself is halved and has fields of blue and mulberry. A single white rose, the symbol of the House of York, is set in the center with a background of golden rays emanating from behind it. Both King Edward IV, the first Yorkist monarch, and his brother King Richard III, the last Yorkist monarch, used the shield in their personal badge. In fact, Queen Elizabeth II’s father King George VI would use this same shield as his personal badge before he ascended to the throne. At that time, he was the Duke of York.

The silver bullion and gold bullion coins are now available for presale with JM Bullion and will begin shipping as early as late September. If you have questions, please feel free to call us at 800-276-6508. You can also connect with us online through our live chat and email address options. Don’t forget to follow us on Facebook for daily updates and weekly contests, and as always, check back with our blog on Fridays for detailed information on upcoming coin releases and new products.