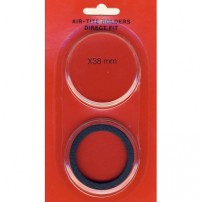 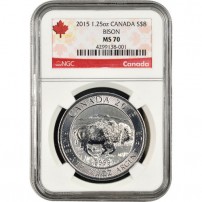 When these brilliant coins were first released, they marked the arrival of 1.25 oz pure silver coins for the first time ever from the Royal Canadian Mint. The coins have rotating designs on the reverse field, which means the motif of the 2015 Canadian Silver Bison Coin is unique to this release year. When these designs sell out, they are gone for good!

The newest Canadian commemorative bullion product from the Royal Canadian Mint is the annual release Canadian Silver Bison. Debuting in 2015, the Canadian Silver Bison coin features .9999 pure silver content, with a face value of $8 (CAD) fully backed by the government of Canada. The Royal Canadian Mint will produce a new image on the reverse face of these coins each. Features of the available design on these coins to date include:

In 2014, the Royal Canadian Mint debuted a range of new security features on its Canadian Maple Leaf series of bullion coins. Those new security features, which include micro-laser engraved radial lines and a maple leaf privy added to the Maple Leaf bullion program in 2014 became available on the 2015 Canadian Silver Bison from its initial launch. The features includes radial lines visible on both sides, and a maple leaf privy on the reverse that bears in the year of issue, visible only under intense magnification.

The 2015 Canadian Silver Bison Coin is available for purchase today from JM Bullion in a variety of different conditions. The first releases of the product are available in BU, or brilliant uncirculated condition. Coins in this condition exhibit no signs of wear and tear, though you may notice minor flaws ranging from breaks in the luster and spotted surfaces to contact marks from the coining process. These coins ship to you in one of three different packages:

Additionally, the 2015 Canadian Silver Bison is available in two different grades and conditions from both of the major certification services in the world. JM Bullion currently offers the following options:

Background on the Royal Canadian Mint

Originally founded in 1908, the Royal Canadian Mint has today grown to become one of the world’s preeminent sovereign mints. Canadian currency was originally, from 1858 until 1908, struck by the Royal Mint in London. The growth of Canada as a nation in its own right, combined with the discovery of gold and other precious metals in the Yukon Territories, eventually facilitated the need for the nation to have its own mint.

The Royal Canadian Mint operated for nearly 70 years with only its original Ottawa coining facility. In 1976, a secondary mint location opened in Winnipeg, nearly 16 years after the government was advised of a need to expand capacity. At one point in time, the Royal Canadian Mint had to turn to the United States Mint to produce circulation currency for the nation.

Today, the royal Canadian Mint strikes more than 1 billion coins annually. In addition to its popular Canadian Maple Leaf series of gold, silver, and platinum bullion coins, the mint also strikes currency for as many as a dozen other countries.

At JM Bullion, you have the option of paying for your 2015 Canadian Silver Bison Coins with a variety of payment methods. We accepted Visa and MasterCard credit/debit cards, paper checks, bank wire transfers, and PayPal fund transfers. Credit/debit cards take an average of one business day to process. Bank wire and PayPal transfers often process immediately. Payment by paper check requires four to six business days to clear the bank.

If you opt to pay via paper check, you’ll enjoy the highest maximum purchase amount available from JM Bullion, as well as a 4% discount on your total purchase price. Those paying via bank wire transfer also enjoy a 4% discount on the total purchase of goods. All shipments from JM Bullion are sent in discreet packaging to ensure the security of your packages during deliver. We are also proud to offer you free shipping and insurance for all your Disney Silver coins purchased through JM Bullion.

The United States Postal Service and UPS are our official shipping partners. Should your package become lost or get stolen at some point during delivery, JM Bullion will work with the carrier to recover your packages if possible. If that is not successful, we will work to provide you with a replacement product (depending upon availability) or provide you with a refund for your purchase.

If you have any questions about Canadian Silver Bison Coins, please don’t hesitate to contact JM Bullion at 800-276-6508. You can also reach out to us online using our live web chat and email services. Keep your eyes open and perusing the JM Bullion online catalog as more Disney Silver Coins are sure to arrive in the future.