One of the most common bullion designs used around the world is that of the eagle, the world’s largest bird of prey. With a total of 74 identified species living on six of the world’s continents, the eagle is also one of the most common birds of prey that humans see in the wild. In the United States, the bald eagle is the official emblem of the nation and has featured on countless circulation coins and bullion collections. A new 10 oz silver round available from JM Bullion offers an ultra-high-relief visual of the eagle that showcases its splendor in a way no other product has in recent years. Before these popular silver rounds are gone, make sure you take a moment to check out this new release. 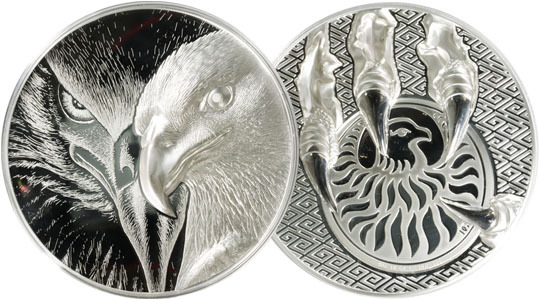 On the obverse side of the 10 oz Majestic Eagle Silver Round is a depiction of the powerful talons of an eagle. The razor-sharp claws on the talon seemingly jump off the design field with their powerful visuals. The claws of the talon tightly grip a small stylized eagle design. This stylized eagle is contained within a smaller circular field and depicts an eagle with its wings flexed out around the smaller design element as its head looks to the right.

The reverse face of 10 oz Majestic Eagle Silver Rounds comes with two images of eagle’s heads. Both depictions capture the eagle with real-life visuals that include details of the feathers in the bird’s plumage. In the background, there is an eagle with its sharp gaze staring right at the viewer with its head titled slightly downward. In the foreground, there is another eagle gazing off toward the horizon.

Each one of the Majestic Eagle Silver Rounds in this release comes with 10 Troy oz of .999 pure silver. The rounds are individually packaged inside of protective plastic capsules and come with a limited mintage of just 1,000 silver rounds.

All eagles are part of the familia Accipitridae, but belong to several groups of genera. Not all of the world’s eagle species are closely related to one another genetically. Of the species of eagles living today, 60 of them are endemic to or originated in Europe, Asia, and Africa. There are another 14 species of eagles living around the world. Among those, two species live in North America, nine in Central and South America, and three in Australia. The most prominent in North America is the bald eagle. Adopted as the official emblem of the United States of America in 1792, the bald eagle is easily identifiable by the white feathers in the plumage of its head. The largest bird of prey in North America, the bald eagle can dive at speeds of up to 99 MPH when attacking its prey.

Get Your 10 oz Majestic Eagle from JM Bullion

If you have any questions about the new 10 oz Majestic Eagle Silver Rounds, JM Bullion customer service is here to assist you. Our team is available to you on the phone at 800-276-6508, online through our live chat, and using our email address. We also encourage you to follow us on Facebook for daily and weekly updates, as well as reading our blogs for weekly in-depth looks at new and upcoming products.