The concept of Chakras within the body is an ancient belief that arose on the Indian Subcontinent. Though Western Chakras were developed, based on these ancient beliefs, in the 19th and early 20th centuries, the Chakras of the ancient world are still the ones that billions lean on each year in trying to lead a healthy life. Coin designs featuring depictions of the seven Chakras of the Hindu faith have featured on coins before, but a new release of Solomon Islands silver takes the concept to a new level. 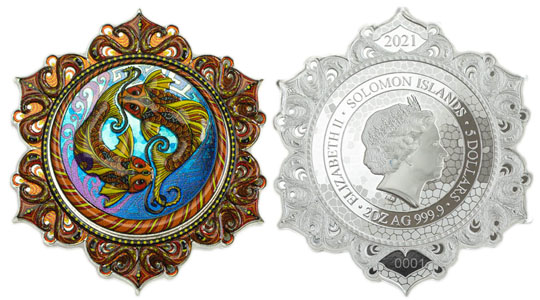 On the reverse of the 2021 2 oz Colorized Solomon Islands Silver Fish of the 2nd Chakra Coin is a depiction of two catfish swirling around one another in the center of the field. The entire coin is shaped like the artistic renderings of the 2nd chakra, with impressive layers of colorization applied throughout the design field. American artist Phil Lewis is behind the design of the Silver Fish of the 2nd Chakra in this release.

The obverse side of 2021 Colorized Solomon Islands Silver Fish of the 2nd Chakra Coins features a portrait of Queen Elizabeth II. Her Majesty is shown here in right-profile relief in the popular Ian Rank-Broadley design. This effigy of the Queen was created in 1998 for the Royal Mint of England and has featured on coinage from around the world.

Details of the Silver Fish of the 2nd Chakra Release

The silver coins in the Solomon Islands Fish of the 2nd Chakra Release come with 2 oz silver blanks that boast .9999 pure silver content and a legal tender face value backed by the Solomon Islands. The coins are packaged inside of custom capsules that match the exact shape of the coins. Each one is housed inside of themed shipper with an included Certificate of Authenticity. The mint set the mintage at just 1,500 coins for this release. Each coin also has a unique serial number etched on the obverse and boasts proof-like visuals such as frosted designs and mirrored fields.

About the 2nd Chakra

The 2nd Chakra comes from the Hindu religion within India. Buddhist and Hindu religions in India have slightly contrasting views of the Chakras, with Buddhist texts mentioning only five chakras, while Hindu texts mention six or seven. The sacral chakra, as the second chakra is known, is the energy center of the body. Bringing this chakra into balance unlocks your sense of creativity, sensuality, and emotions.

The colorized artwork on the reverse of these coins comes from Phil Lewis. Mr. Lewis grew up in Lake Tahoe and Colorado, spending as much time as he could in the great outdoors. Now an acclaimed artist living in Boulder, Colorado, Mr. Lewis draws influence from nature in his art. When he looks at nature, he sees only the shapes and colors that he can integrate into his art.

Collect While You Can!

The silver coins of the Solomon Islands Silver Fish of the 2nd Chakra release are already sold out at the mint, so JM Bullion is one of your best bets for adding this coin to your collection! Please feel free to contact us with questions at 800-276-6508, chat with us live online, or simply send us an email. We encourage our customers to follow us on Facebook and read our weekly blog posts for more information on new and upcoming releases.