The Australian Phoenix & Dragon Coin was introduced by the Perth Mint in 2017 as a silver bullion coin program. After rousing success with the collection during its first release year, the Perth Mint opted to expand the program in 2018 to feature a new gold bullion version of the coin as well. The 2018 1 oz Australian Dragon & Phoenix Gold Coin is available from the Perth Mint for the first year ever and just the second year for the design program. JM Bullion is proud to offer this beautiful coin design right now in our online catalog of gold coins for sale. Read on to learn all about the new gold version of the Phoenix & Dragon Coin.

From the nation of China, the dragon and phoenix have a deep, cultural tradition. The dragon is the official emblem of the People’s Republic of China, and cultures around the world are familiar with the lore of the phoenix. The dragon, as the nation’s emblem, is the arguably the most important creature to the people of China. Traditionally, dragons are a symbol of power, strength, and good luck. For thousands of years, emperors would use the dragon as a seal or shield on flags to represent their strength and power as leaders. For average Chinese people, those associated with the dragon were known to have good luck or be viewed as worthy of that luck. Dragons are also associated in some instances with control over weather patterns, particularly water, rainfall, and flooding.

The phoenix is a different animal altogether. The mythical bird is a symbol of regeneration. A phoenix would famously meet the end of its life with a magnificent burst of light and flame, falling into a pile of nothing but ashes following its flamboyant death. However, this spontaneous combustion was nothing more than a precussor to life being born anew in the form of a different phoenix. These two creatures are significant in Chinese culture and make the perfect addition to any collector’s Lunar Series II or other Chinese cultural coin from the Perth Mint. 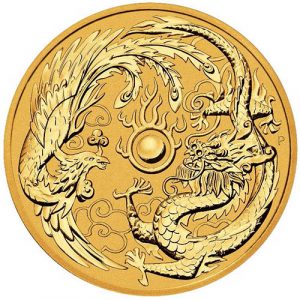 Based upon the coin design released in 2017. The 2018 1 oz Australian Gold Phoenix & Dragon Coin has a very low mintage figure of just 5,000 coins in total and is available in three different purchase options. Individual coins are available to you in protective capsules courtesy of the Perth Mint, with multiples of 20 coins sealed inside of rolls. For purchase of 100, you receive five rolls of 20 coins each inside of a sealed box. The coins feature 1 Troy oz of .9999 pure gold in BU condition with a face value of $100 (AUD). Each coin is considered legal tender in Australia under the Currency Act of 1965.

On the reverse of the 2018 1 oz Australian Gold Phoenix & Dragon Coin is the image of the Phoenix and the Dragon juxtaposed against one another. Each creatures associated features and powers are captured in the background design of the coins. The Dragon can be found on the right-hand side of the coin, and with its control over weather and water, you can see background artwork reflecting clouds and weather. The Phoenix is featured on the left-hand side of the coin, and because the mythical bird is often associated with the sun in many cultures, a flaming pearl is visible on this side of the coin.

The obverse of the Australian Gold Phoenix & Dragon Coin features the image of Queen Elizabeth II. This is the fourth-generation effigy of Her Majesty, and it was created in 1998 by Ian Rank-Broadley. Included on this face are engravings identifying Her Majesty, the nation of issue, the coin’s weight, purity, metal content, year of issue, and face value in Australian Dollars.

The Perth Mint is a state-owned, non-sovereign mint in Australia. Formerly part of the Royal Mint facility during British colonial rule, the Perth Mint is today the oldest operating mint in the nation, having opened its doors for operation in 1899. For a brief period of Australian history during confederation, the mint fulfilled duties as a sovereign facility along with the Melbourne Mint. Today, the government of Western Australia owns the Perth Mint. It produces many of the finest bullion coins in the world, including the Australian Kookaburra, Australian Koala, and Australian Kangaroo. The Lunar Series, now in its second generation (2007-current) is one of its most famous coin programs as well.

Get Your Phoenix & Dragon from JM Bullion

The 2018 1 oz Australian Gold Phoenix & Dragon Coin is available to purchase now from JM Bullion. If you have any questions, don’t hesitate to contact our customer service team. Don’t forget to connect with us on Facebook, where you’ll learn about the latest coin releases, important and trending topics in precious metals, and where you can also join in the conversation yourself. Our Facebook page is also a great way to stay informed about the latest blog posts.