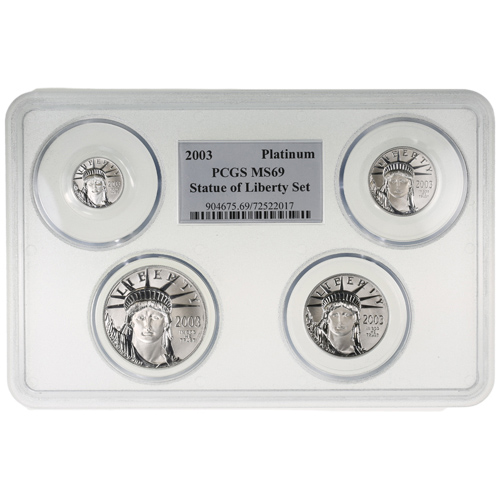 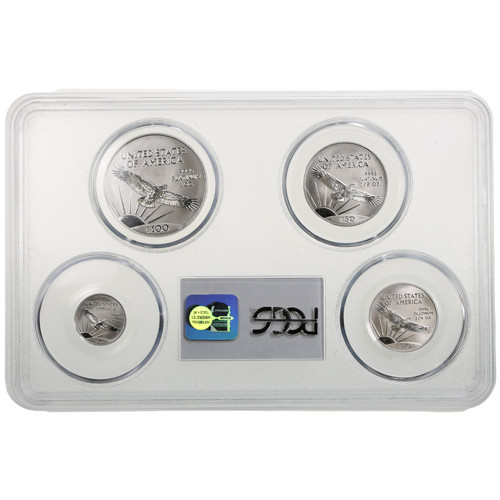 John Mercanti and Thomas D. Rogers were the individuals behind the designs on the coins in the American Platinum Eagle Coin Set. Mercanti was, in 1997, the Chief Engraver of the United States Mint. He created the obverse imagery on the American Platinum Eagle coin that depicts Lady Liberty from the Statue of Liberty gazing into the nation’s future.

The reverse design of all American Platinum Eagle bullion coins, such as those in this set, comes from Rogers. In 1997, Rogers was a sculptor and engraver at the United States Mint. His eagle soaring above America is the only design to have featured on the bullion and proof coin in the same year, as the proof coins have a new design every year dating back to 1997.

American Platinum Eagle Coin Sets such as these include four coins in total. You’ll find a 1 oz, ½ oz, ¼ oz, and 1/10 oz bullion American Platinum Eagle coin included in this set. Because the fractional-weight coins are no longer struck by the US Mint, your set will feature four coins of the same issue date ranging only from 1997 to 2008, the final year that bullion coins were offered in these weights.

Each of the individual coins in this American Platinum Eagle Coin Set is in Mint State 69 condition according to the PCGS. Coins in this condition exhibit full, original mint luster and feature a maximum of two minor detracting flaws on the surface areas. These flaws are limited to miniscule contact marks or hairlines, and are found only outside the primary focal areas of the coin.

We encourage all JM Bullion shoppers to reach out to us with questions. You can contact our customer service team members at 800-276-6508, chat with us live online, or simply send us an email with your inquiries.