Marvel Comics are dominating the box office and taking over the numismatic sector of precious metals. There are an increasing number of gold and silver coins for sale online today that feature the major characters from the Marvel Cinematic Universe. Examples of this include the Captain America: Civil War Series and the more recent Marvel Series Silver Coins. Now, there’s a new option from Marvel that is truly unique. The new 2 oz Antique Fiji Marvel Iron Man Mask Domed Coin is something that must be in the collection of any series Marvel fan! 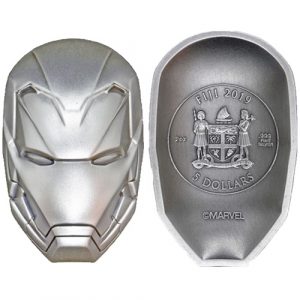 A Domed, 3D Design Unlike Any Other

The new 2019 2 oz Antique Fiji Marvel Iron Man Mask Domed Coin is a 3D strike that accurately depicts the vision of Iron Man’s mask. The coin stands nearly 2 inches tall when set on its edge and features an antique polish that makes for the perfect kickoff to the new Marvel Icon Series of silver coins. There is no information available at this time on the upcoming designs to follow, but Iron Man is the perfect coin to lead off such an impressive series.

On the reverse side of the coin is a flat surface upon which you’ll find the official seal of Fiji. The engravings on this face include “Fiji 2019,” “2 oz .999 Fine Silver,” and “5 Dollars” inscribed around the coat of arms for Fiji. The Marvel copyright logo is featured on this side of the coin as well.

Distinctive Packaging and a One-of-a-Kind COA

If the design of this new Iron Man Domed Coin wasn’t enough to attract collectors, the low mintage and the distinctive packaging of these coins should just about do it. The coins have a limited issue of just 5,000 coins in total. The coin itself is in a black satin-lined box that includes the numbered Certificate of Authenticity and the lid of the black box features a small logo depicting the Iron Man mask. The boxes are housed inside of Marvel-themed shipping sleeves that also have the Iron Man logo on the front.

What is perhaps the most unique feature of this release is the Certificate of Authenticity. Rather than printing the COA and accompanying information on paper, the Certificate of Authenticity is a 2 Gram foil of silver with all the pertinent information on the coin. This is a unique departure from the typical COA format and is sure to catch on in terms of popularity.

Although the future designs to come in the Marvel Icon Series are unknown, Iron Man is the perfect leadoff for this series. Iron Man first appeared from Stan Lee and Marvel Comics in 1963. He is widely regarded as the founding member of the superhero team known as the “The Avengers,” and the recent success at the box office of all Marvel Cinematic Universe feature films launched with the 2008 debut of the first Iron Man film. Robert Downey Jr. has successfully portrayed Iron Man on the big screen in numerous films following the 2008 release of Iron Man, including Iron Man 2 (2010), The Avengers (2012), Avengers: Age of Ultron (2015), Captain America: Civil War (2016), and Avengers: Infinity War (2018).

The new Antique Fiji Iron Man Mask Domed Silver Coin is currently available to purchase online from JM Bullion. You can contact our customer service team if you have any questions about purchasing these coins. We also encourage you to engage with JM Bullion through our Facebook page, where you’ll receive the latest updates on new additions to our catalog and upcoming coin releases. Keep reading our blog as well to get in-depth information on new coins, upcoming series, and exciting new design releases.