A New Option is Available in the Noah’s Series: Gold Coins Debut in 2020!

The Armenian Noah’s Ark Series from Geiger Edelmetalle has been available to investors since 2011. One of Europe’s more popular collections, the series features static designs on the obverse and reverse that are the same each year. However, until now the collection has only featured a silver bullion option for buyers. As of 2020, the collection has expanded for the first time in eight years to now feature gold bullion coin options for investors to consider alongside the silver coins in the series. Read on to learn more about the new 2020 gold options in the Armenian Noah’s Ark Series. 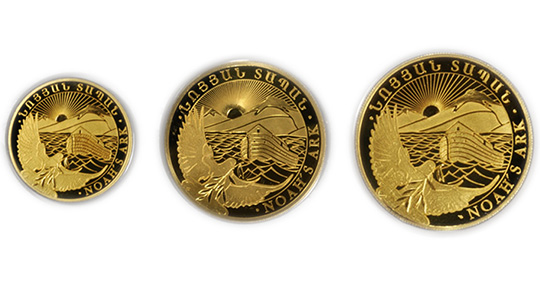 The obverse and reverse designs of the new 2020 Armenian Gold Noah’s Ark coins share the same images used on the Silver Noah’s Ark coins. The obverse face of all coins in this collection includes the national coat of arms for the Republic of Armenia. The modern coat of arms for Armenia was adopted on April 19, 1992, following the dissolution of the Soviet Union and the Eastern Bloc nations. Armenian authorities devised a coat of arms for the newly independent nation that incorporated elements of ancient Armenian kingdoms and designs reflecting its past as a member of the Soviet Bloc. The quartered shield in the design is supported by an eagle on the left and a lion on the right. These symbols originated with ancient Armenian kingdoms that predated the birth of Christ and were often used in the badges and emblems of those rulers.

On the reverse field of the new 2020 Armenian Gold Noah’s Ark Coins is a design from Eduard Kurghinyan. This beautifully detailed image captures the moment in the biblical tale of Noah when the rains that God has sent to flood the Earth finally begin to subside. After 40 days and 40 nights of rain and storms, God has finally called a halt to the weather and allowed the sun to return. As the weather clears, Noah releases birds from the ark to see if dry land is discoverable. The first bird returns to the ark after flying around, indicating it has found no place to land. The second bird he releases is a dove and it returns to the ark as well, but brings with it a twig from an olive tree, symbolizing that dry ground is there to be found. In this design, you see the moment the dove returns to the ark as it flies into the foreground of the design field. The ark is floating along on the now-calm floodwaters as the sun begins to rise over Mount Ararat in the background field.

Like the Armenian Silver Noah’s Ark Series, the new Armenian Gold Noah’s Ark coins come with several options for investors to choose from when buying gold. In keeping with the unique lineup of silver coins in the series, the gold series has its own unique offering of gold coins that include the following weights:

Maximum mintage figures are not the only thing that sets the Gold Noah’s Ark Series apart from its silver counterparts. Each of the weights in the Armenian Noah’s Ark Series of gold coins comes with an individual, secure packaging. Each coin is individually sealed inside of a secure blister card that only allows access to the coin if the packaging is completely destroyed. Included inside of the blister card is a Certificate of Authenticity card that identifies the weight, purity, metal content, and individual serial number for the coin inside. The card itself has a design on one side reflecting Eduard Kurghinyan’s design on the reverse of the coin and an image of the ark resting on the top of Mount Ararat on the other side.

History of the Series

Background on the Mint

Geiger Edelmetalle is a private German mint located in Leipzig, Germany. The mint traces its roots all the way back to 1218 when a private silver trading company was formed by a local family. The growing silver industry in this region of Germany sustained refining at what would become Geiger Edelmetalle. Today, the mint is one of the most respected in Germany and produces a range of gold, silver, and platinum bullion bars in addition to these Noah’s Ark coins for the Republic of Armenia.

Now is your chance to invest in the new 2020 Armenian Gold Noah’s Ark coins while supplies last. If you have any questions, please feel free to contact JM Bullion. Our team is available to assist you on the phone at 800-276-6508, online using our live chat, and via our email address. You can also follow us online through Facebook and read our weekly blogs to stay in the know on upcoming new product releases.