The Star Wars franchise of feature films has now reached the conclusion of a third trilogy of films on the big screen, but from the 1970s to the 2020s, the sci-fi franchise remains immensely popular beyond the theater. In recent years, precious metals enthusiasts with a love for Star Wars have been able to collect designs of their favorite characters across all three trilogies courtesy of the New Zealand Mint. The latest installment of Star Wars silver coins offers one of the characters to have gained a large cult following Boba Fett. Here’s your chance to learn more about this coin before investing in a new Star Wars silver coin. 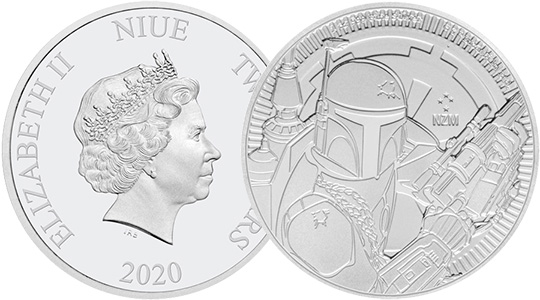 Boba Fett went from being a little-used character in the original trilogy to one who had cult status among the fans of all three trilogies of films. Fett appeared in both the original trilogy and the prequel trilogy but features the Star Wars Classic Series of bullion coins at the New Zealand Mint focusing on characters from the original series. The mint has limited the mintage of these coins to just 100,000 silver coins in total.

Each coin has 1 Troy oz of .999 pure silver and arrives in Brilliant Uncirculated condition. The coins have a $2 (NZD) face value backed by Niue. Individual coins come with a protective plastic flip, while multiples are housed in mint packaging. This includes tubes of 25 coins or Monster Boxes of 250 coins. The Monster Box contains 10 tubes in total and comes with a Star Wars-themed lid featuring images of Boba Fett.

On the reverse of the 2020 1 oz Niue Silver Star Wars Boba Fett coin is a depiction of the bounty hunter who famously captured Han Solo with the help of Darth Vader. Fett is shown wearing his full Mandalorian armor with a blaster in hand. The New Zealand Mint mark is featured in the design field and consists of the famous Southern Cross star constellation.

The obverse face of 2020 1 oz Niue Silver Star Wars Boba Fett coins includes a design with the bust of Queen Elizabeth II. This is the famous fourth-generation design from the Royal Mint of England. Created in 1998 by Ian Rank-Broadley, this bust of the Queen has featured on British and Commonwealth coins for more than two decades. The image shows the Queen in right-profile relief with the Girls of Great Britain and Ireland Tiara on her head. The inscriptions featured on this side of the coins include the Queen’s name, the nation of issue, face value, and date of issue.

Boba Fett made his debut in the Star Wars universe outside of the original trilogy of films. He first featured the Star Wars Holiday Special released in 1978 and was the main antagonist in the animated segment. He first appeared within the trilogy films in The Empire Strikes Back in 1980 among a group of bounty hunters that Darth Vader hires to try and capture Han Solo. Fett is successful in tracking Solo to Cloud City, where Vader has him frozen in carbonite and Fett is permitted to deliver his body to Jabba the Hutt. He would later appear in Return of the Jedi at the palace of Jabba the Hutt and was added to A New Hope when a digitally remastered version was released.

2020 Niue Silver Star Wars Boba Fett coins are currently available from JM Bullion. If you have questions, we are available on the phone at 800-276-6508 to assist you. Our team is also available on the web through our live chat and email address features. Don’t forget to check our blog each week for new posts and follow us on Facebook.