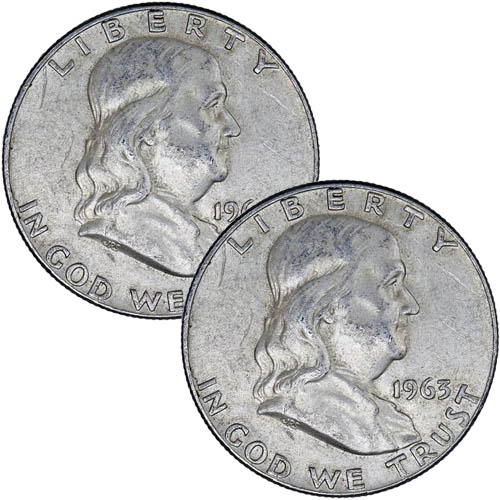 Following the long-running Walking Liberty Half Dollar coin design, the United States Mint introduced a new design on the 50-cent piece in 1948 that focused on one of the nation’s Founding Fathers. Benjamin Franklin appeared on the half dollar from 1948 to 1963. Right now, 90% Silver US Franklin Half Dollars are available to purchase online from JM Bullion with a total face value offering of $1 (USD).

Each 90% Silver US Franklin Half Dollar Coin you receive here comes in a protective plastic bag of two coins. The total face value of your two coins is $1 (USD) and these coins come from previous circulation. As such, you will find that these coins are in varied conditions based upon the previous handling and the original date mark.

After the Walking Liberty design was halted on the half-dollar coin, the US Mint introduced a design from John R. Sinnock of the famed American diplomat and Founding Father, Benjamin Franklin. Sinnock partnered with US Mint Engraver Gilroy Roberts to work on a design for the reverse of these coins focusing on the Liberty Bell from Franklin’s adopted hometown of Philadelphia.

On the obverse of 90% Silver US Franklin Half Dollars is the right-profile portrait of Benjamin Franklin. Though he is often known for his writing and inventions, Franklin was also an accomplished diplomat during America’s founding era. He was the 1st United States Postmaster General, a Speaker of the Pennsylvania Assembly prior to the Revolution, the 6th President of Pennsylvania during the Confederation period, and served as United States Minister to Sweden and France.

The reverse of Silver US Franklin Half Dollar Coins includes an image of the Liberty Bell. The Liberty Bell was originally housed in the tower at Independence Hall in Philadelphia and was chosen for the reverse of these coins. However, as US legislation dictates the American bald eagle must appear on all US coins, a small heraldic bald eagle was added to the design to the right of the bell.

All Franklin Half Dollar coins came from the era of 90% silver content in circulating American coins. The coins contain 90% silver and a 10% copper base.