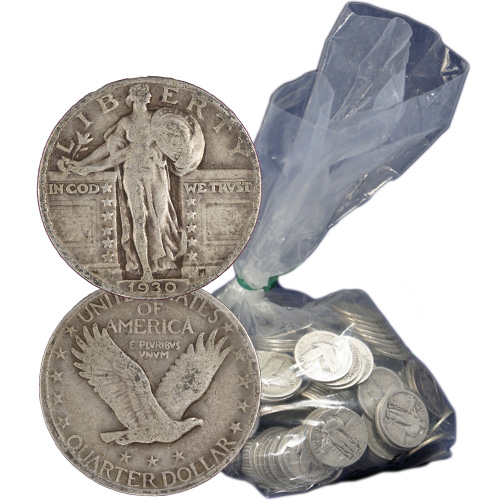 In 2016, the United States Mint celebrated the centennial release of three of its most iconic and beloved coin designs of all time. Included in that list is the Standing Liberty Quarter design from Hermon Atkins MacNeil. You now have the chance to own one of the original coins from US circulation with the purchase of 90% Silver Standing Liberty Quarters from JM Bullion today.

The Standing Liberty design on the US quarter was one of the more short lived designs from the US Mint. Starting in the 1910s, the US Mint began to work on replacing and modernizing coin designs, many of which were created in 1892 by Chief Engraver Charles E. Barber (US Mint 1879 to 1917).

Standing Liberty replaced the Barber Quarter design, but was itself replaced after just 14 years on the coin. Standing Liberty Quarters were discontinued in 1930, with no new designs issued in 1931. Starting in 1932, the US Mint released the Washington Quarter, which remains in circulation today.

On the obverse of 90% Silver Standing Liberty Quarters you’ll find the image of Liberty standing between the break in a wall. “In God We Trust” is engraved on the wall, with two words from the motto on either side of the break. Liberty was originally depicted by MacNeil as a topless figure, but once in circulation the coins featured Liberty with a chain mail chest plate.

The reverse of the Standing Liberty Quarter was also designed by MacNeil. It featured the American bald eagle in flight, wings outstretched, with engravings of “E Pluribus Unum,” the nation of issue, and face value of the coin.

All 90% Silver Standing Liberty Quarters in this listing have a condition of average circulated. Coins in this condition show signs of wear and tear that typically result from use as a medium of exchange or from mishandling.

We encourage all JM Bullion shoppers to reach out to our customer service team with questions. You can contact us on the phone at 800-276-6508, connect with us online using our live web chat, or send us an email. To view similar products, check out our full selection of 90% Silver.