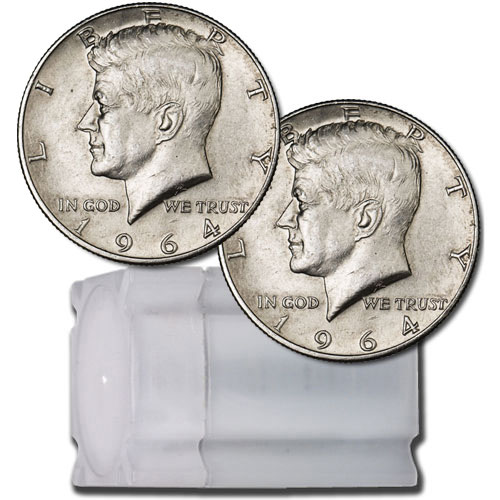 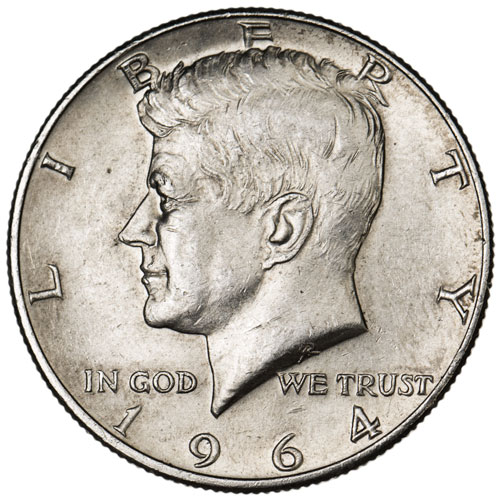 One of the most popular American presidents of the 20th century was John F. Kennedy. The youngest man ever elected president and the first Catholic, Kennedy served until his assassination in November 1963. Kennedy is honored with his portrait on the nation’s circulation half-dollar coin, but the first year of the series was the most significant. Today, 90% Silver Kennedy Half Dollars are available from JM Bullion in $10 tubes with BU grades.

In this unique product listing from JM Bullion you will receive a $10 tube of 90% Silver Kennedy Half Dollars. The coin was first introduced in January 1964, just three months after the president was assassinated. Only the 1964 strikings of the coin contained 90% silver content, with future releases in circulation containing only 40% silver.

The coins were designed in the immediate aftermath of Kennedy’s assassination in Dallas in November, 1963. US Mint sculptors Gilroy Roberts and Frank Gasparro were tapped to modify existing dies, which allowed the quick turnaround and production of Kennedy Half Dollars to replace the existing Benjamin Franklin Half Dollars.

On the obverse of each coin is a left-profile bust of President John F. Kennedy created by Gilroy Roberts. It includes the simple engravings of “Liberty” above his head, “In God We Trust” on either side of his neck, and the year of issue below.

The reverse of the 90% Silver Kennedy Half Dollar includes Frank Gasparro’s modification of the Seal of the President of the United States of America. It includes the nation’s heraldic eagle in the center, with an olive branch in one talon and arrows in another. It holds a banner in its beak that reads “E Pluribus Unum.”

Your tube may contain coins with or without mintmarks.  Philadelphia minted coins were unmarked that year and the Denver mint included a D mintmark on the reverse side.

These coins all have a Brilliant Uncirculated grade, which indicates that they exhibit no signs of wear and tear. However, you’ll notice minor flaws that include breaks in the luster, spotted surfaces, or contact marks.

Please don’t hesitate to contact JM Bullion if you have any questions. You can reach us on the phone at 800-276-6508, chat with us live online, or send us an email. To see similar products, check out our full selection of 90% Silver.

Bruce from - August 24, 2019
"Was delivered quickly coins were beautiful . Thanks"

MORGAN from CA - July 05, 2017
"I bought (2) BU Kennedy Half Dollar rolls. I am by no means a "coin professional" I just like me some shiny silver. After opening only one of the rolls and spending about 5 minutes thumbing through the first roll, I noticed really great shiny coins with what looked like small dots of dirt and minor scratches on them. I am content but after reading that a BU is "brilliant uncirculated" I was expecting these to all be flawless. Not enough for me to send back but enough for me to check out other products, even other websites... sorry JM every other purchase I have made has been perfect. I will spend more time with the coins and if my opinion changes I will write a new review. 7/5/17"

Thomas from VA - January 31, 2017
"I got my order of 1964 Kennedy Half Dollars. They are beautiful....This is the 1st time I have actually seen brilliant, uncirculated Kennedy halves! There was a good mix of P and D mints in the collection.....Will get Franklin halves next! Thanks JM Bullion!"