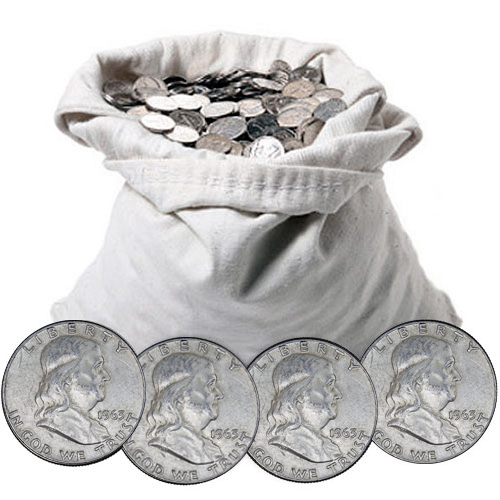 Any quantity available for $10.99 per oz over spot!
Add to WishlistLog In to add this product to your Wishlist
Free Shipping on $199+ Orders

Benjamin Franklin is one of the only non-presidential figures to ever feature on a circulation coin in the United States. During an era in which the US Mint was replacing old images of Liberty with former US Presidents, Franklin found his way onto the half dollar for 16 years before being replaced by President John F. Kennedy. Today, 90% Silver Franklin Half Dollars in a $500 Face Value lot are available to you online from JM Bullion.

The effigy of Benjamin Franklin, one of the Founding Fathers and an early American diplomat overseas during the American Revolution, was selected for the half dollar in 1948. An early statute signed into law in the US in 1890 forbade the replacement of American coin designs before 25 years without congressional approval. As the Walking Liberty Half Dollar had been issued first in 1916, by 1948 there was no need for congressional approval to place a new design on the coins.

All of the 90% Silver Franklin Half Dollars in this product listing come to you with date marks ranging from 1948 to 1963. Each one of the coins has 90% silver content and 10% copper. The bag your coins arrive inside of features a total of 1,000 US Half Dollars from the Benjamin Franklin design period. You will note that there are many different date marks likely to be inside of the bag.

On the obverse of 90% Silver Franklin Half Dollars is a right-profile portrait of Benjamin Franklin. In addition to running important media outlets in the colonies during the American Revolution, Franklin would notably serve overseas in France as one of the first American diplomats trying to garner support for the cause from powerful European allies.

90% Silver Franklin Half Dollar coins were produced by the Denver Mint and San Francisco Mint with “D” and “S” mint marks, respectively, on the reverse fields of the coins. The specimens were also struck at the Philadelphia Mint with no mint marks issued.

Please feel free to contact JM Bullion with your questions. You can reach us on the phone at 800-276-6508, chat with us live online, or email us directly.