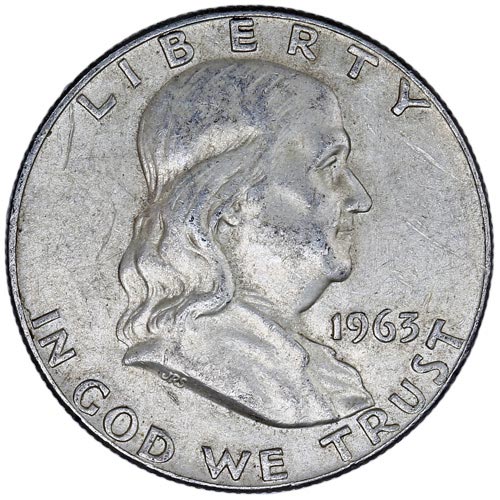 Any quantity available for $10.99 per oz over spot!
Add to WishlistLog In to add this product to your Wishlist
Free Shipping on $199+ Orders

Benjamin Franklin was one of the most influential Founding Fathers of the United States, but his role was far from the battlefields or the halls of Congress throughout much of his career. Franklin was an inventor and writer, and more importantly, an overseas diplomat currying favor for the American cause during the Revolution. Right now, the 90% Silver Franklin Half Dollar is available from JM Bullion.

The path to appearance on coinage for Benjamin Franklin was a complicated one. Under an 1890 statute, coin designs could not be changed without Congressional approval unless the design had been in service for 25 years including the first issue year.

Starting in 1933, US Mint Director Nellie Tayloe Ross wanted to see the man she admired on the nation’s coinage. However, the quarter had just been redesigned in 1932 to feature George Washington. The Walking Liberty Half Dollar and Mercury Dime could be changed without Congressional approval in 1940, but World War II interfered.

The high demand for coins during World War II made it difficult to replace designs, with the half dollar and dime eligible as of 1940. In 1946, the dime was redesigned to honor the recently deceased President Franklin D. Roosevelt.

That left the Walking Liberty Half Dollar to be replaced with Franklin’s likeness. Benjamin Franklin appeared on the obverse of the half dollar from 1948 until 1964, when his image was replaced by that of the assassinated John F. Kennedy. Franklin’s right-profile portrait was created by mint engraver John R. Sinnock, who also created a Liberty Bell design for the reverse.

The reverse side of the 90% Silver Franklin Half Dollars was dominated by the Liberty Bell, an iconic landmark of Franklin’s hometown of Philadelphia, PA. However, US law dictated that the American bald eagle must appear on the reverse of all half dollars, so a small heraldic eagle was put in on the bell’s right.

All 90% Silver Franklin Half Dollars available here come in protective plastic with a total of 20 half-dollar coins included. The coins were struck between 1948 and 1964.

If you have any questions, please don’t hesitate to ask. JM Bullion associates are available at 800-276-6508, online using our live web chat, and via our email address. To see similar products, check out our full selection of 90% Silver.

David from AL - March 21, 2019
"Usually always a very good experience with JM. Still happy with my purchase of these Franklin halves only mine came in plastic bags and not in tubes. So be aware."