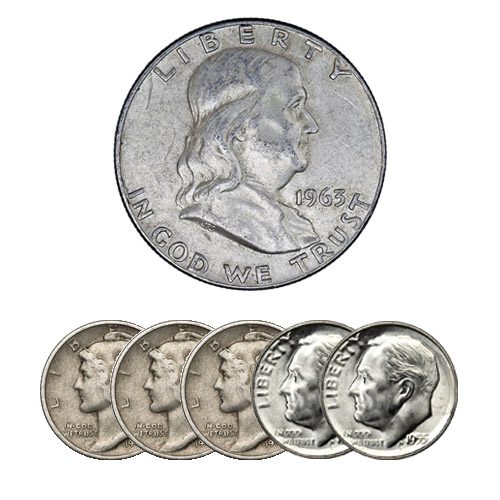 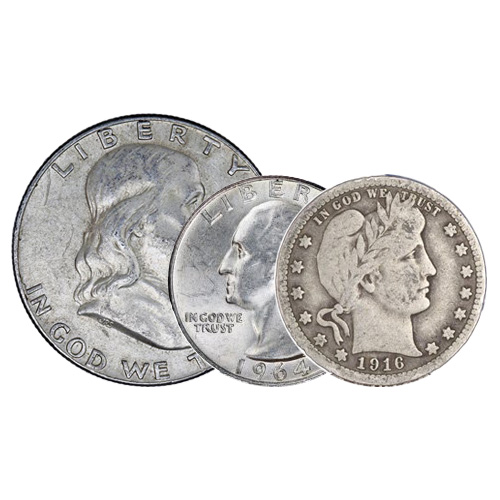 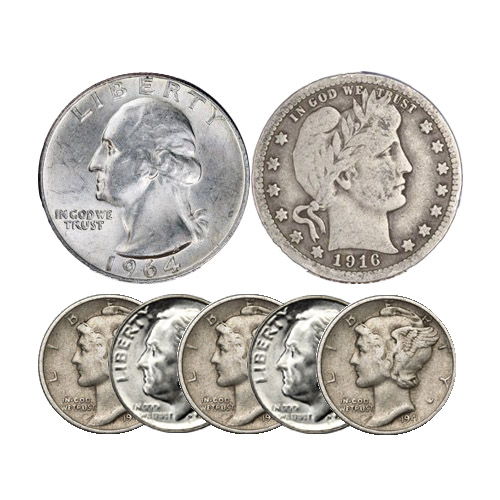 Any quantity available for $19.99 per oz over spot!
Add to WishlistLog In to add this product to your Wishlist
Free Shipping on $199+ Orders

Picture is just an example of what you may receive. Each $1 bag may contain a variety of different sizes of coins, all of which will add up to $1.

When it comes to investing in silver, you don’t always have to buy proof and bullion coinage from sovereign mints to make a solid investment. Ninety percent silver offers an extremely affordable option when buying silver because it comes without the added premiums over the spot price of silver associated with bullion coinage. There are 90% Silver Coins available to purchase today from JM Bullion in $1 increments.

In this product listing you have the chance to purchase 90% Silver Coins from JM Bullion, available with a total face value of $1 (USD) and consisting of US 10-cent, 25-cent, and 50-cent pieces. These coins were all struck prior to 1964, the point at which the United States Mint adopted cupro-nickel and other metallic alloy combinations for circulation coinage.

There are many possible designs you could receive in these 90% silver coins. The earliest design possibilities come from the so-called Barber Coinage of the United States Mint. Starting in 1892 then-US Mint Chief Engraver Charles E. Barber created the obverse and reverse designs of the nation’s dime, quarter, and half dollars as part of a revamp of American coinage.

Beginning in 1905 under the administration of President Theodore Roosevelt, the United States embarked upon another revitalization program for American coins, this time with the aim of creating distinctly American designs that reflected the nation’s growing prominence as an international power.

Among the designs you’ll find from this era are the Mercury Dime from Adolph A. Weinman, the Standing Liberty Quarter from Hermon Atkins MacNeil, and the Walking Liberty Half Dollar from Weinman.

The Mercury Dime was actually a depiction of Liberty wearing a winged Phrygian cap that was similar to that worn by the Roman messenger god, Mercury. The dime was in circulation in the United States from 1916 to 1945.

Another famous image from Weinman, and arguably one of the most popular in American history, is that of Walking Liberty. Designed in 1916 by Weinman, it depicted Liberty walking toward the setting sun as a symbol of America’s drive toward a brighter future. This design was in circulation on the half dollar until 1947, and appears today on the American Silver Eagle bullion coin program.

90% Silver Coins make a great investment option for those just starting out in precious metals. The condition of the coins means little to the overall value, because there is no expectation of perfect condition. However, the intrinsic value lies in the 90% silver metal content and the lower pricing point at which you can purchase the items.

We encourage JM Bullion customers to contact us with questions at 800-276-6508, on the web using our live chat, and via our email address.

Aaron from - August 04, 2019
"Ordered $5FV and got 20 Roosevelt dimes, 4 Washington quarters, and 4 Franklin half-dollars. I like the suspense of wondering which ones I will get and I enjoyed the ones I got. Most conditions were very good and I am very pleased. Will order again for more variety!"

Brandon from WI - August 01, 2019
"Got 4 pre-1965 Washington quarters. Was hoping for some variety but they were 90% silver and in good condition. Fast shipping as always!"

C from - April 29, 2019
"Would be 4.5 stars if i could. Ordered 3 dollars FV. Received 3 dollars worth of 1964 kennedy halves. figured i would receive some variation. But it was 90%, shipped quickly packaged well. Just wanted more variety "