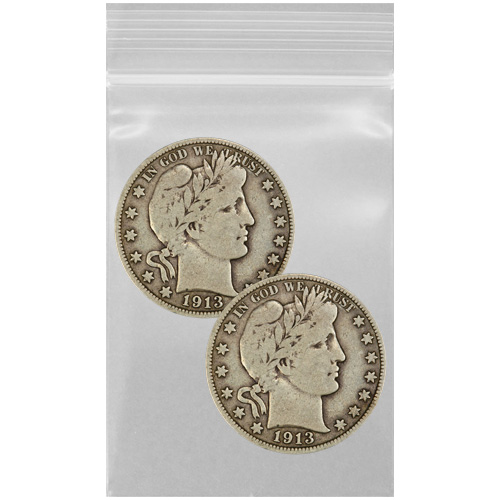 From 1892 to 1916, the primary coin denominations from the United States Mint all shared a common obverse of Liberty with two of the three coins sharing the same reverse as well. The dime, quarter, and half dollar issued during this period became known as the Barber Coinage for the designer, US Mint Chief Engraver Charles E. Barber. Right now, 90% Silver Barber Halves are available to purchase in a $1 Face Value bag from JM Bullion.

Each of the 90% Silver Barber Halves in this product listing come to you inside of a plastic bag with a total of two individual coins. These coins are packaged together to make a total face value of $1 (USD). Each coin has an individual face value of $.50 (USD) and date marks that range from 1892 when the designs were first struck to 1916 when the very last coins were issued with this design. These are Very Good-plus coins, indicating that each has medium to heavy wear, but you will also still easily notice some of the details in the design.

The American public was upset with the appearance of its coins throughout much of the late 19th and early 20th centuries. Long before President Theodore Roosevelt launched a redesign initiative in 1905, Americans of the 1870s and 1880s lamented the outdated and uninspired designs on American coins. Charles Barber’s dime, quarter, and half-dollar designs were an attempt to assuage that displeasure.

On the obverse of these 90% Silver Barber Halves, you will find a right-profile bust of Lady Liberty. Barber’s portrait of Liberty is heavily influenced by Greco-Roman designs and her strong features almost give a masculine appearance to the face of Liberty. In this design, she wears a wreath crown.

The reverse side of 90% Silver Barber Halves includes the heraldic eagle of the United States. Redesigned many times throughout American history, Barber came up with this version for the quarter and half dollar in the Barber Coinage range. It includes an eagle with the national shield on its chest, olive branch in one talon, arrows of war in the other, and a half-moon cluster of 13 stars above its head.

These coins are referred to as 90% silver in the modern era because of the silver content in most US coins from the 1820s until 1965. During this period, each silver coin the US issued had 90% silver and 10% copper, the latter adding greater durability in circulation.

If you have any questions, please contact JM Bullion customer service. Our team members are available at 800-276-6508, online using our live chat, and via our email address.