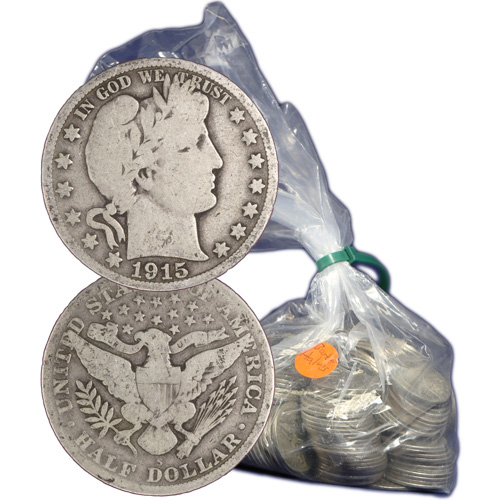 Charles E. Barber served as Chief Engraver of the United States Mint from 1879 until his death in office in 1917. Barber is renowned for his Barber Coinage, designs for the dime, quarter, and half dollar which were all created by him for use on American circulation currency in the late 19th and early 20th centuries. Right now, the 90% Silver Barber Half Dollar is available from JM Bullion.

These coins have .900 silver content, a feature not currently found in American coinage anymore. US coins abandoned the use of any silver in coinage following passage of the Coinage Act of 1965, which established new metal alloy combinations for American coins.

Charles E. Barber was born in the United Kingdom to William Barber, and is part of the only father-son combination to serve as Chief Engraver of the United States Mint. Charles’ father served as Chief Engraver immediately before him, with Charles taking over the position from his father in 1879.

On the obverse of all 90% Silver Barber Half Dollar coins is the image of Liberty in right-profile relief. She is featured in a classical, ancient Roman figure with a Phrygian cap on her head, headband, and a crown wreath with the word “Liberty” across it on her forehead.

The reverse of all Barber Half Dollar coins includes the heraldic eagle of the US. In use on American coins since 1794, this design has been updated at various times. This depiction includes the American bald eagle behind the national shield with arrows in one talon and an olive branch in the other.

All 90% Silver Barber Half Dollars in this listing features an average circulated condition. Coins in this condition exhibit signs of wear and tear consistent with use as a means of commerce exchange or mishandling.

If you have any questions, please don’t hesitate to ask. JM Bullion associates are available on the phone at 800-276-6508, online using our live web chat, and via our email address. See similar products on our 90% Silver page.

Phillip from MD - March 16, 2017
"Been wanting some Barber coinage for quite awhile, and these popped up here at a substantially better price than a competitor. Got a very good assortment of dates, with at least one of each year except for 1892 and 1893. Well-worn coins to be sure. A stack of 200 Franklin halves I have weigh almost 7% more than this stack of Barber halves, no doubt due to the worn out nature of these coins. But hey, even the newest ones are over 100 years old! It's fun to look through the coins and think about all the thousands, or hundreds of thousands, of times these coins were used to buy things, and what they must have been used to buy. I'd definitely buy again, I wish I had waited a week or two because spot price went down, but I suppose it could have just as easily gone up. ;-)"