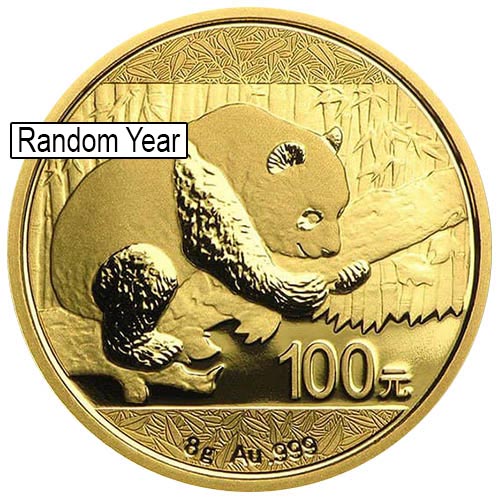 The Chinese Gold Panda coin is a staple of the precious metals market. These gold coins have been available for purchase since 1982, however, the series underwent an important change in 2016 that altered its course. Since 2016, the coins have featured weights in Grams rather than traditional Troy ounces. Today, 8 Gram Chinese Gold Panda Coins are available to you online from JM Bullion.

All major, modern bullion coin collections feature weights measured and indicated in the traditional Troy ounces. The Chinese Mint used this weight for its Panda Series, both gold and silver, from the 1982 introduction of the gold coins. Starting in 2016 however, the mint switched to Grams.

The move was highlighted by the Chinese Mint as an opportunity to bring the program in line with the country’s use of the metric system. It also had the effect of making the Chinese Gold Panda the first bullion series in the world marked in Grams rather than Troy ounces.

All 8 Gram Chinese Gold Panda Coins available here today arrive in their sealed plastic packaging from the Chinese Mint. JM Bullion offers these coins with a random year of issue, and we select the specific coin you receive based on the availability of date marks in our warehouse at the time your order is processed for shipping.

On the reverse of the 8 Gram Chinese Gold Panda coin is one of many stunning images of the Giant Panda species. With a new depiction of the bears on the reverse each year, there is no telling which of the beautiful designs you’ll receive with your purchase today.

The obverse of the 8 Gram Gold Panda coins features the same design used since 1982. The Temple of Heaven is a Taoist religious complex formerly used for Chinese heaven worship in the 15th century. The building depicted here is known as the Hall of Prayer for Abundant harvests and was visited annually by early emperors wishing for good harvests from the nation’s crops.

Please don’t hesitate to reach out to JM Bullion with your questions. Our customer service team is available to you on the phone at 800-276-6508, online using our live chat service, and via our email address.