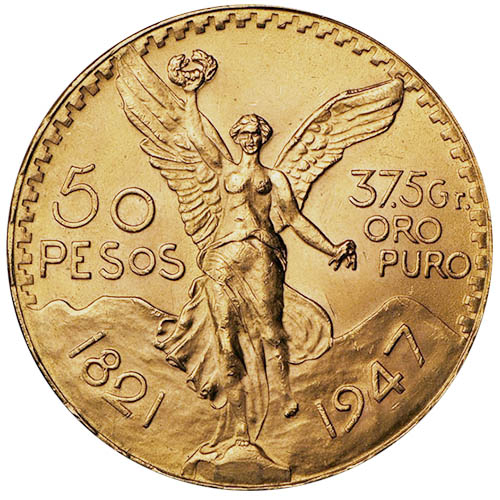 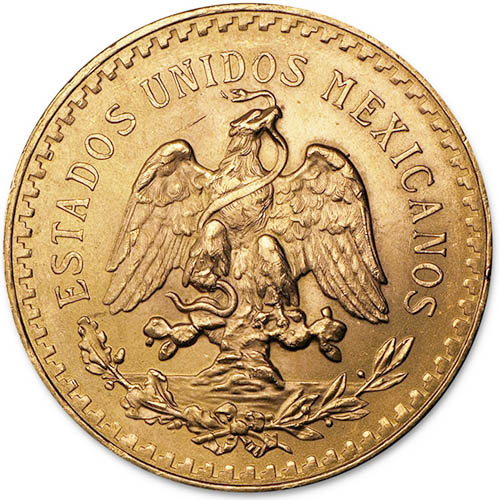 Each of the 50 Peso Mexican Gold Coins available to you in this product listing comes from a random year of issue with variable conditions offered. JM Bullion cannot guarantee the year of issue you’ll receive with your purchase or the condition of the coin. Your particular 50 Peso Mexican Gold Coin will be chosen based upon availability in our warehouse when your payment is processed and the coin selected for shipping.

The 50 Peso Mexican Gold Coin is more commonly known today as the gold Centenario, so-called because it was first issued in 1921 by the Mexican Mint to commemorate 100 years of Mexican independence from Spanish colonial rule. The coins were issued regularly from 1921 to 1931, with production restarted in 1943 to meet rising demand for gold coins. All coins in the collection issued from 1949 to 1972 typically have a set “1947” date mark.

On the obverse side of the 50 Peso Mexican Gold Coin, you’ll find the original depiction of Winged Victory. Designed by Emilio del Moral, this image features a front-facing Angel of Independence as she holds the wreath crown of military victory and self-governance over her head in her right hand. The left hand is down at her side and clutches the broken chains of servitude.

The reverse of all 50 Peso Mexican Gold Coins features the coat of arms for Mexico. These coins could feature various depictions of the Mexican coat of arms, but the general design remains focused on a golden eagle on a cactus perch as it battles with a snake.

Scott from TX - November 01, 2020
"This is one large coin! A "BU" of Gold! The likes of this beauty, you have never truly experienced until you have on in your hands! Thank you JM! The coin arrived on a Saturday and is really a BU specimen! "

Charles from MD - December 13, 2018
"I ordered two 50 Peso coins and received one dated 1945 and one dated 1946. Both are in excellent condition and well worth the small premium over the spot price. "

Brad from AL - August 06, 2018
"The 50 pesos coin I received was as advertised and in great shape. Was glad to add this coin to my collection!"