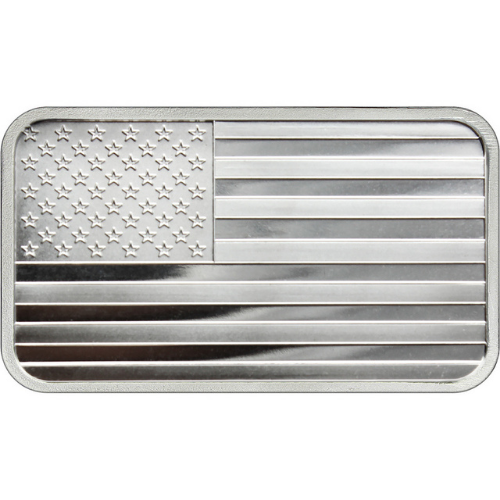 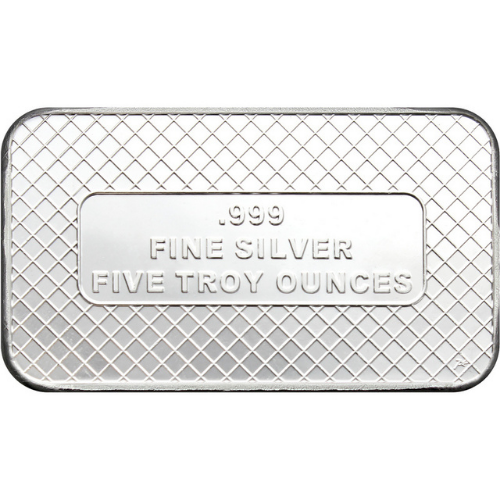 The American flag is one of the most recognizable national flags in the world today. Conceived of during the American Revolution, it has evolved countless times throughout American history from the original flag with a circle of 13 stars to the modern design with 50 stars. Various aspects have, however, remained constant throughout the history of the US flag. Right now, 5 oz SilverTowne American Flag Silver Bars are available to purchase online from JM Bullion.

Each 5 oz SilverTowne American Flag Silver Bar available in this product listing comes to you as a brand-new product from SilverTowne. These bars offer an expansion on the existing lineup of American flag silver bars from the mint, with 1 oz and 10 oz silver bars already offered in this collection. The bars are packaged individually in sealed plastic or in boxes of 100 bars.

The flag of the United States of America goes by many names. Over the course of American history, it has been referred to as the Star-Spangled Banner, Old Glory, the Red, White, and Blue, and the Stars and Stripes. By whatever name you call it, the American flag is a symbol of freedom, Liberty, and democracy known around the world.

The obverse features of 5 oz American Flag Silver Bars include an accurate depiction of the modern American flag. True to the form of the American flag used for more than two centuries, the design has alternating red-and-white stripes arranged horizontally on the primary field. These stripes represent the 13 colonies of British North America that broke with the United Kingdom to form the United States of America. The blue field in the upper left includes white stars, with the modern design boasting 50 stars in total, one for each state in the Union. Though there is no colorization on these bars, the design is nonetheless accurate.

In order to create visual contrast between the stripes within the design field, SilverTowne uses alternating polished and mirrored fields to help the stripes stand out from one to the next. The modern design of the American flag was created in 1958 by Robert G. Heft, who completed his flag design as part of a class project.

On the reverse of 5 oz SilverTowne American Flag Silver Bars, you will find a cross-hatched background field. This field includes a clear central design within which you will find the identifying hallmarks of the bar.

If you have questions when you buy silver bars online, please feel free to ask. JM Bullion customer service is available at 800-276-6508, online using our live chat, and via our email address.