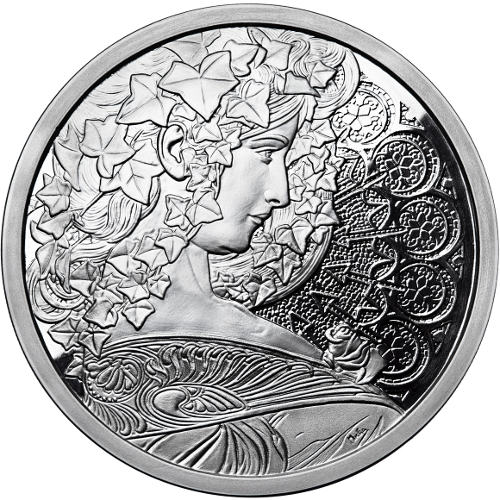 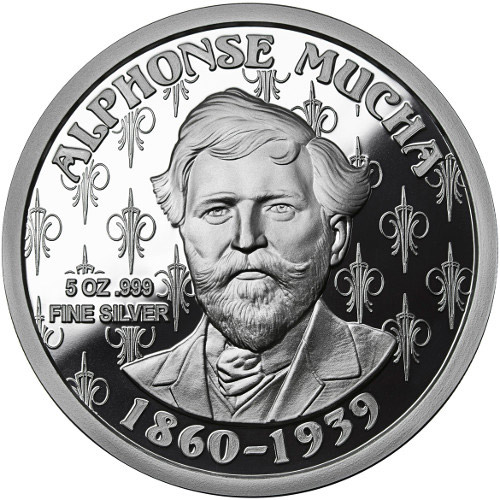 Alphonse Mucha famously created numerous works of art over the course of a career that spanned from 1896 to 1939. Among his many famous works, most were used on advertising posters and reused by other companies over the course of the decades spanning from the end of the 19th and into the early 20th century. Today, the 5 oz Proof Mucha Collection Ivy Silver Round is available to you online from JM Bullion.

Between 1895 and 1900, Alphonse Mucha released six different series of artistic panels, or posters, as part of the growth of the Art Nouveau movement. Mucha was a leading artist in the creation of decorative panels, and this would play a significant role in his growing popularity during the period.

Building upon that success, Mucha released two commissioned artworks for the dancer Lygie in 1901. These two designs are known as Ivy and Laurel, and the first of the two to debut was Ivy. Considered an artwork inspired by Lygies figure, Ivy was the first and appears before Laurel in the Mucha Collection from Anonymous Mint.

All 5 oz Proof Mucha Collection Silver Rounds feature a beautiful, clear and mirrored background field. The edge of all rounds in the Mucha Collection include individual serial numbers, which are accompanied with a numbered Certificate of Authenticity that validates each of the rounds.

On the obverse of all 5 oz Proof Mucha Collection Ivy Silver Rounds youll find the right-profile portrait of Ivy. Much like Muchas other works, Ivy takes the form of a beautiful woman with soft features and suggestive appeal or gestures used in the artwork. Beyond his poster artworks, which became widely available to people from all walks of life, Mucha created apostage stamp, banknote, and other designs for the fledgling government of Czechoslovakia following World War I.

The reverse of the 5 oz Proof Ivy Silver Round includes a portrait of the artist himself. Mucha was born in what was then the Austrian Empire in 1860. Today he is viewed as a cultural icon for the Czech Republic, as the modern day nation encompasses the region in which he was born in 1860.

Anonymous Mint developed the Mucha Collection Silver Rounds with the approval of The Mucha Foundation. Coin creator Julie Lindquist worked with engraver and Italian Master Sculptor Luigi Badia on all six designs released in this stunning silver round collection.

Please direct your questions to a JM Bullion customer service team member at 800-276-6508. You can also connect with us online through our live chat and email features.