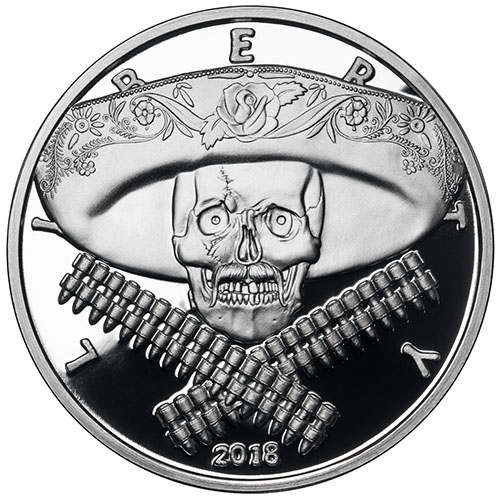 The American West was a wild and lawless place. The vast, open expanses between US Military forts, outposts, and small towns resulted in plenty of room for bandits to ply their trade and then hide out without little fear of being captured. The Mexican outlaws of the day were often called banditos, which derives from the Spanish term bandido.

All of the 5 oz Proof American Western Skulls Mexican Bandito Silver Rounds depict the image of a Mexican outlaw. Each of the individual rounds is available to you inside of a protective plastic package with a serial number engraved on the edge of the round. The included Certificate of Authenticity reflects the same serial number.

On the obverse side of the Proof American Western Skulls Mexican Bandito Silver Round is the image of an outlaw. Known as the Mexican Bandito, this individual wears a large sombrero with a big smile on his face and thick mustache on his upper lip. The crossed weaponry featured on this design is that of a bandolier, which holds all of the ammunition he’ll need to rob stagecoaches or hold up a bank.

Please don’t hesitate to reach out to JM Bullion if you have questions. Our customer service team is available to you on the phone at 800-276-6508, on the web using our live chat service, and via our email address.