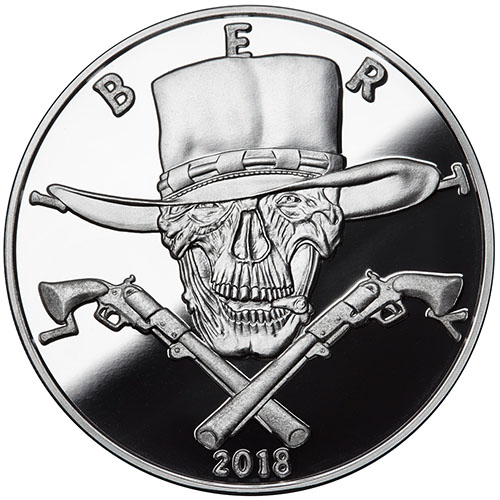 The American Western Skulls Collection of silver rounds from Osborne Mint lifts the veil of romanticism that has often clouded the reality of America’s Old West time period. The designs in this series feature six different characters from the era, each one depicted in the form they all ended up in: skeleton. Right now, 5 oz Proof American Western Skulls Gunslinger Silver Round is available to purchase online from JM Bullion.

In the American Western Skulls Collection, all Gunslinger Silver Rounds are shipped inside of protective plastic capsules to ensure the quality and condition of the round’s design finish. Your purchase today includes a numbered Certificate of Authenticity that matches the individual serial number engraved on the edge of the round.

Each 5 oz Proof American Western Skulls Gunslinger Silver Round features a brilliant proof visual to the design. Proof rounds feature a deeply mirrored background field with strong, frosted elements to the design aspects. This provides visual contrast between the two fields to help the design elements stand out against the background.

Gunslingers were ubiquitous in the American West during the 19th and early 20th centuries. These men fell on both sides of the line between good and evil. Some men were talented marksmen wearing a badge and enforcing the law, while others used a quick draw and lethal aim to create havoc and break the law.

On the obverse of the 5 oz Proof American Western Skulls Gunslinger Silver Round is the skeletal figure of a gunslinger. This gruff individual gazes at the viewer with a tough look on his face that includes a wrinkled glare and a devilish smile. There are two six-shooters crossed below the figure in keeping with the common design aspect of all obverse fields in the series.

The reverse of the Gunslinger Silver Round in this collection includes the fried eagle. This twist on the heraldic eagle of the United States features a bird fried to a crisp and captured in skeletal form, instead of with a full body of feathers.

Osborne Mine is the oldest private mint in the United States. Tracing its roots back to the mid-1830s, the Osborne Mint has been continually operating since Andrew Jackson was in the White House and the United States had a balanced budget with no national debt.