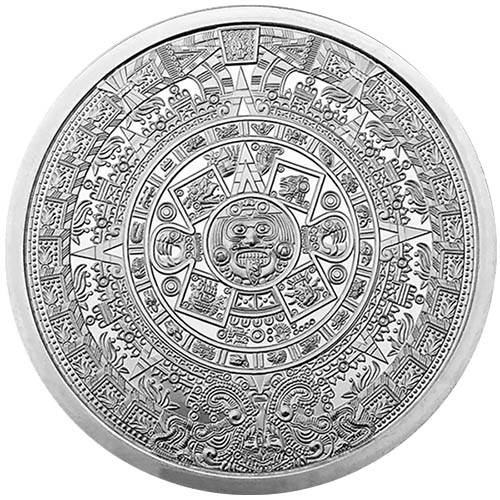 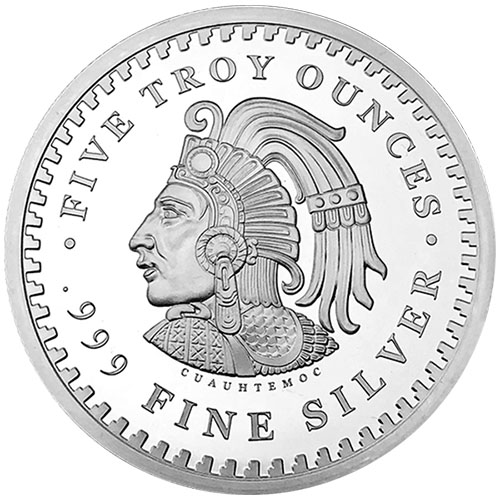 The Aztec calendar stone, also known as the Aztec sun stone, is one of the most important cultural pieces remaining from the Aztec Empire of Central America. The stone was removed from the Aztec capital during the Spanish conquest and unearthed in Mexico City in 1790. It is now the inspiration for a stunning silver round design from the Golden State Mint. Today, 5 oz Aztec Calendar Silver Rounds are available to you online from JM Bullion.

As the Spanish colonizers swept through Central America, they brought with them smallpox and advanced weapons of war that would eventually bring the Aztec Empire to its knees. By the time Cuauhtemoc had come to power as the leader of the Aztec Empire, his people were facing certain annihilation. The Aztec calendar stone is one of the most relevant pieces of Aztec culture that remains today.

All 5 oz Aztec Calendar Silver Rounds in this listing are available to you in either individual protective plastic flips or within tubes of 20 rounds. The designs on both sides are intricate in nature and reflect Aztec culture. The 5 oz silver round is a larger version of the already available 1 oz silver round in the collection.

On the obverse of 5 oz Aztec Calendar Silver Rounds is a depiction of the carvings found on the Aztec calendar stone. The center of the design features Tonatiuh, the Aztec solar god. He is depicted holding human hearts in each of his two clawed hands. He is surrounded by a design that has 20 symbols, each one representing a different day of the month on the Aztec calendar.

The actual Aztec calendar stone is carved onto a giant piece of basalt rock that measures 141 inches across and weighs some 24 short tons. Unearthed in Mexico City in 1790, the rock was discovered while renovations were taking place on the Catholic cathedral in the city. The rock hung from the wall of the cathedral until 1885. Today it is located in the National Anthropology Museum.

For the reverse of the 5 oz Aztec Calendar Silver Round, the Golden State Mint uses the left-profile portrait of Cuauhtemoc. He was the final emperor of the Aztec Empire and was chosen by a council of elders to lead the nation as it faced defeat at the hands of the Spanish. He was eventually captured by the Spanish in 1521 as he helped his people flee their capital city of Tenochtitlan. He would later be executed by the Spanish in 1525.