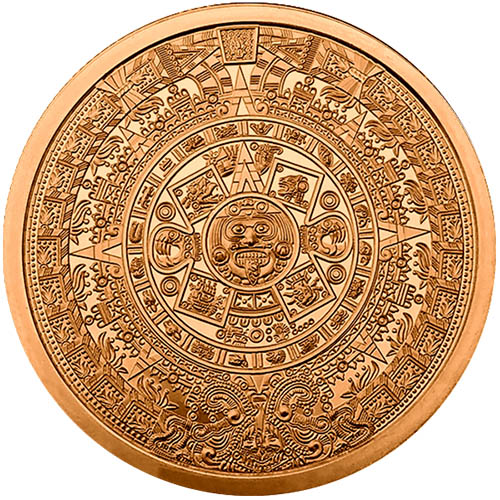 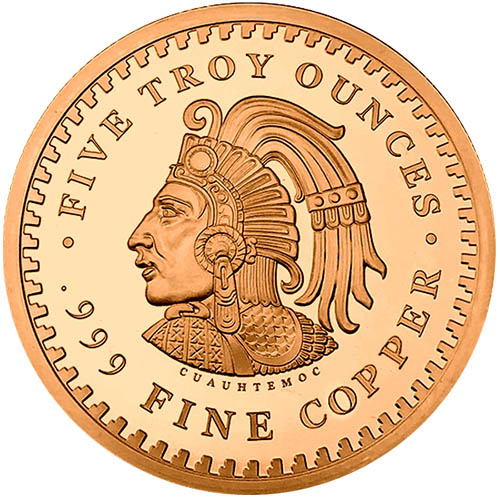 Weighing in at 24 short tons, the basalt stone on which the Aztec solar calendar was carved is one of the most significant artifacts remaining from the peak Aztec Empire. The stone went unseen for nearly 270 years as it lay buried in the center of Mexico City only to be rediscovered in 1790. Today, the sun stones images are on the obverse of silver and copper rounds. Right now, 5 oz Aztec Calendar Copper Rounds are available to purchase online from JM Bullion.

The Aztec sun stone is an example of post-classic Mexica culture, specifically from the Aztec people and it is considered the greatest artifact remaining from the empire that once ruled much of modern-day Mexico and portions of Central America. The sun stone itself was a massive piece of basalt rock that weighs 24 short tons, has a diameter of 141 inches, and is 39 inches thick.

The sun stone consists of multiple, concentric rings with their own design elements. The very center of the ring focuses on the solar deity known as Tonatiuh. This figure is featured in the very center with a stone dagger for a tongue and clawed hands clutching human hearts. This symbolized the practice of human sacrifice to the gods that was common in the Aztec Empire.

On the obverse of the 5 oz Aztec Calendar Copper Round is a depiction of the four major design rings of the sun stone. Tonatiuh is featured in the very center, with designs immediately around his head depicting the four previous suns/eras that came before the Aztec Empire. The next ring showcases designs corresponding to the 20 days of the 18 months and five periods in the Aztec solar calendar.

The reverse face of all Aztec Calendar Copper Rounds features the effigy of Cuauhtemoc. The final emperor of the Aztec Empire, Cuauhtemoc took over an empire in decline. Conflict with neighboring tribes and war against the invading Spanish conquistadors, coupled with crippling European diseases that Aztec people had no immunity to, left Cuauhtemoc with little chance of fending off the Spanish.

If you have any questions about these copper rounds, please contact JM Bullion. You can call us at 800-276-6508, chat with us live online, or email us.