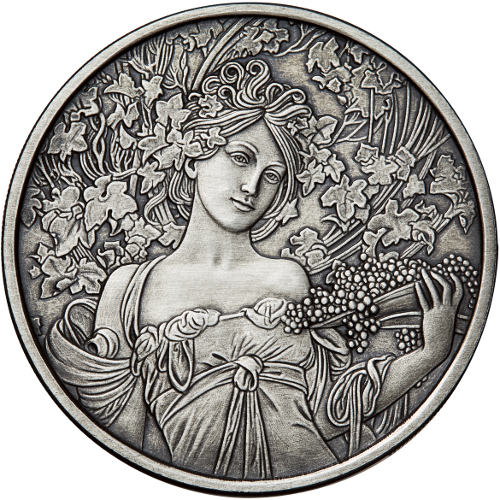 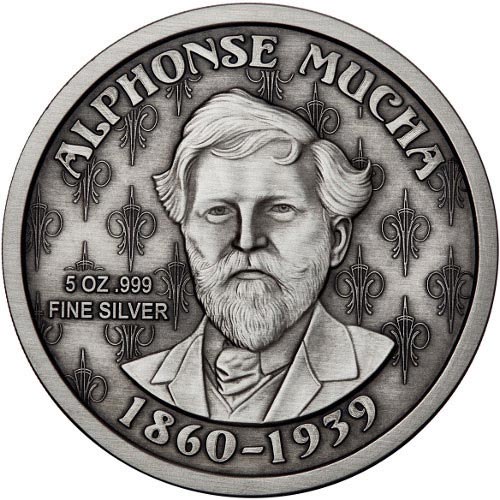 The Mucha Foundation, cataloging the brilliants works of Alphonse Mucha, has given permission to Anonymous Mint to reproduce some of his greatest works on a series of silver rounds. The collection is the work of Julie Lindquist and Luigi Badia, and includes proof and antique options. Today, the 5 oz Antique Mucha Collection Champagne Silver Round is available to you online from JM Bullion.

Alphonse Mucha was born as Alfons Maria Mucha on July 24, 1860 in the Austrian Empire, which is now modern-day Czech Republic. His works began to attract attention in 1895 as he produced posters for plays that launched his career. Later he would produce various ad posters, paintings, and even jewelry and wallpaper.

The all-new Mucha Collection from Anonymous Mint was developed by Julie Lindquist, engraved by Italian master sculptor Luigi Badia, and reviving the works of Alphonse Mucha with the permission of the Mucha Foundation. Mucha was alive from 1860 to 1939, and active as an artist from 1895 until his death.

Muchas Champagne design was created in 1896 as his career was on an upward trajectory following the release of his Job design. Much like Job, Champagne was a beautiful woman with flowing hair, and was commissioned by F. Champenois and used in various adverts throughout the course of Muchas life. As her name suggests, many of the original choices saw her form used for champagne advertisements.

On the obverse of all 5 oz Antique Mucha Collection Champagne Silver Rounds youll find the beautiful image of Champagne. Rather than the full-length figure often depicted in other works, a close-up visual of the Mucha Woman was chosen for this design. All of these antique designs have a patented treatment added to the rounds which bring depth to the design and warmth to the coins old appearance.

The reverse of each of the Mucha Collection Silver Rounds includes a portrait of the artist himself. Mucha was born in present-day Czech Republic, then the Austrian Empire, in 1860 and would launch his artistic career in 1895 with an ad sketch for a local playhouse. He was active in the arts until his death in 1939.

Anonymous Mint is a private minting facility in the United States that specializes in the release of limited-issue silver rounds. The Mucha Collection will feature a total of six designs in total, with four rounds released for each design.

Please direct your questions to JM Bullion. Our customer service team is available at 800-276-6508, on the web using our live chat, and via our email address.

Janet from SC - August 04, 2017
"I agree with Jason. I started by ordering a one oz proof. They were like potato chips, I had to keep ordering, proof and antique. My favorite coins."

Jason from MI - July 06, 2017
"Limited Mintage, how is it that these are still in stock? I have one of each of the Mucha Collection in 5oz antiqued, missing only the final release. Each of them arrives in good time, the shipments are tracked closely and the company is scrupulously tight with order tracking. I order once or twice a month from them and they have never made a mistake with the order. The rounds are masterpieces of craftwork."