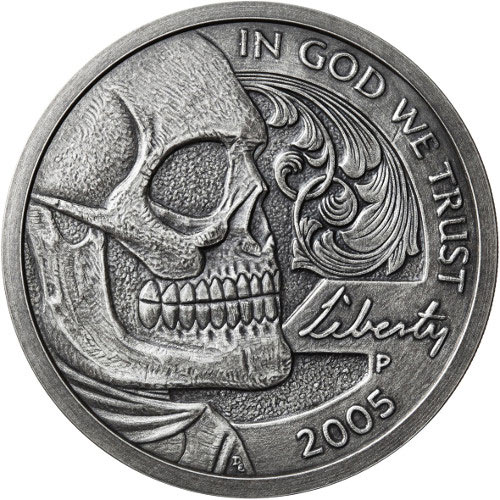 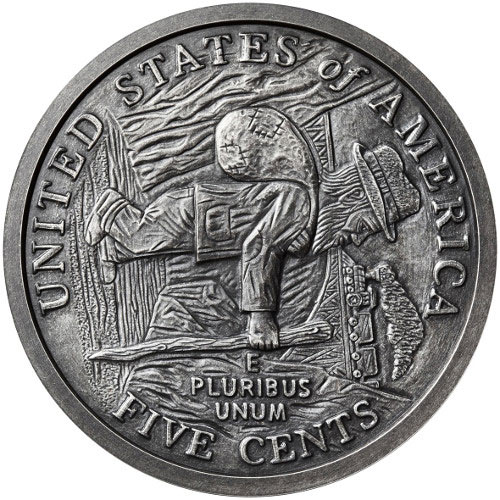 The final release of the 2016 Hobo Nickel Silver Round series has arrived, and it offers yet another innovative take on hobo subculture art from the 18th, 19th, and even early 20th centuries. For the final release, Mr. The combined two coin designs into this one round for a stunning finish to the program. The 5 oz Antique Jefferson Skull Hobo Nickel Silver Round is available today from JM Bullion.

Thomas Jefferson succeeded John Adams as the third President of the United States, and was responsible for the largest expansion of the United States in its history when he purchased the Louisiana Territory from the French. The purchase more than doubled the size of the fledgling nation, and secured Jeffersons place in history.

President Jefferson still appears on the modern, American circulation nickel coin. A special 2005 release featured a reworked portrait of the president as part of the Westward Journey commemorative release marking his expansion of the country.

On the obverse of the 5 oz Antique Jefferson Skull Hobo Nickel Silver Round is the image of a skull in place of Jeffersons right-profile portrait. The image also includes engravings found on the 2005 release, which include In God We Trust and Liberty, along with a year of issue for that coin of 2005.

The reverse of all Jefferson Skull Hobo Nickel Silver Rounds includes the image of a hobo in the foreground, walking along with the aid of his walking stick and carrying all of his Earthly belongings in a humble knapsack over his shoulder. The train in the background puffs out smoke that looks a lot like the buffalos back from Buffalo Nickels.

Each 5 oz Antique Jefferson Skull Hobo Nickel Silver Round listed here has an antique finish, which is highlighted by the addition of warmth and subtle detail to the overall finish and appearance of the silver round. Your product ships in a protective plastic capsule, includes a Certificate of Authenticity, and features edge lettering that highlights the serial number, weight, purity, and metal content of the round.

We encourage all JM Bullion shoppers to reach out to us with questions. You can reach our customer service department on the phone at 800-276-6508, online using our live web chat, and via our email address.