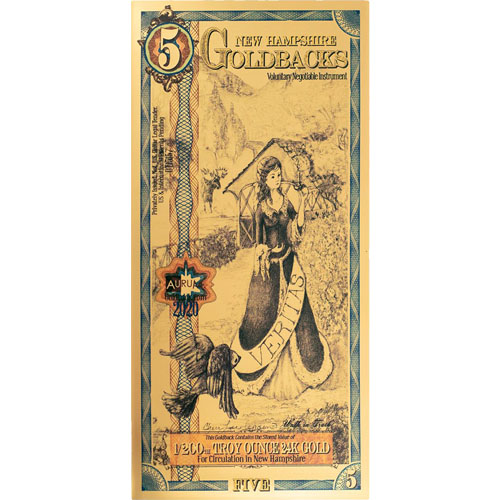 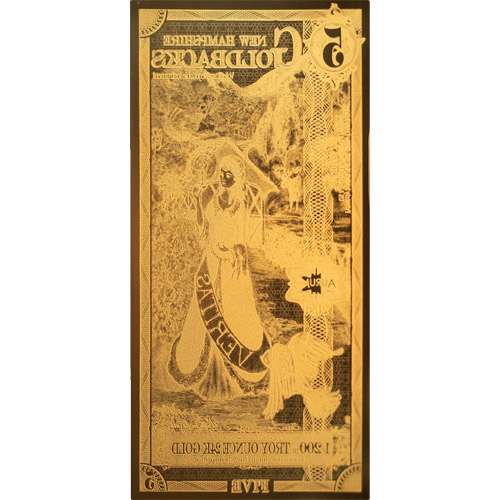 The series of Goldback Gold Notes first introduced for the state of Utah has now spawned two subsequent series for other states. A movement that started out West has now made its way East to the first US State to take control of its own destiny and setup its own independent government. Today, 5 New Hampshire Goldback Gold Notes are available to you online from JM Bullion.

The first shots fired in the American Revolution may have taken place at Lexington and Concord, but one of the first political shots fired in America’s battle for freedom from Great Britain came from the Granite State. Then a colony, New Hampshire decided in January 1776 that enough was enough. The then-colony became the first in British North America to establish its own independent government in a snub to Parliament and the authority of the Kingdom of Great Britain.

The obverse side of the New Hampshire Goldback Gold Note depicts the female personification known as Veritas. Based on the Roman mythological goddess of truth, Veritas is said to be the daughter of Saturn, the Roman god of generation, dissolution, plenty, wealth, agriculture, and liberation. In this design, Veritas is a female personification in a beautiful dress near a covered bridge. In the distance, the rolling hills of New Hampshire are depicted with a moose visible in the distant background.

On the reverse face of the 5 New Hampshire Goldback Gold Note is a blank field. You can see the mirror image of the female personification of Veritas from the obverse, but what is missing are the photo-realistic enhancements. There is no colorization or other details added to the visuals on this side.

Please don’t hesitate to reach out to JM Bullion with any questions about gold for sale. Our team is available on the phone at 800-276-6508, online through our live chat, and using our email address.