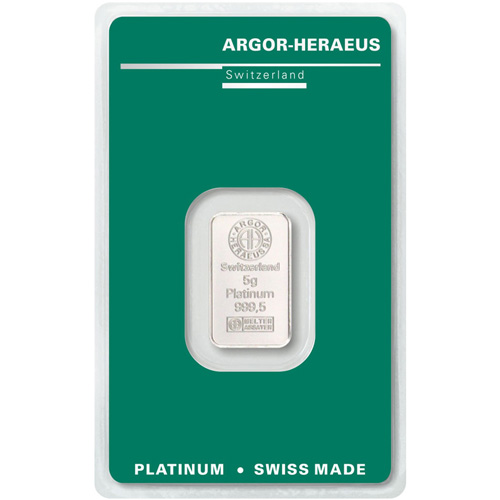 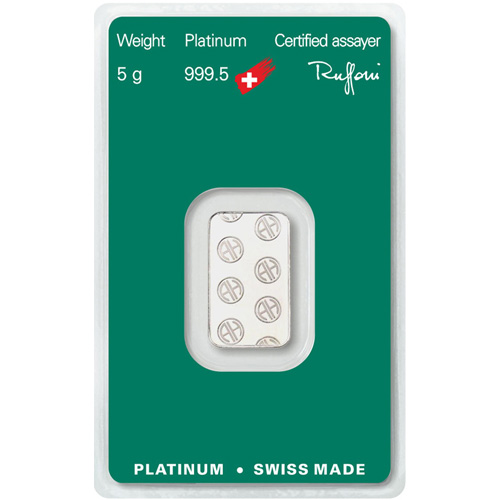 As low as $31.99 per bar over spot!
Add to WishlistLog In to add this product to your Wishlist
Free Shipping on $199+ Orders

Platinum bullion bars are the most common form of investment-grade platinum available. While sovereign mints often produce only platinum bullion coins, a range of private mints issue platinum bars as both minted ingots and cast bars. Argor-Heraeus is a global leader in the production of precious metals for bankers and investors. Included in that production lineup are platinum bars of various weights. Now, 5 Gram Argor-Heraeus Platinum Bars are available to you for purchase online from JM Bullion.

Argor-Heraeus Classic Series of bullion bars includes gold, silver, platinum, and palladium options. The platinum series features weights that range from 1 Gram on the low end to as high as 1 Kilogram, with these 5 Gram Platinum Bars one of the smallest and most affordable options in the series. It is also the smallest bar that takes on a traditional, rectangular shape for minted ingots.

Platinum has not been known to the Old World as long as it has been in the New World. While platinums existence was first documented by Spanish explorers beginning in the 16th century, the ancient, indigenous tribes in Central and South America had been working with platinum to create works of art long before the arrival of Europeans on their shores.

The obverse design of 5 Gram Argor-Heraeus Platinum Bars features a number of different inscriptions and two design elements. The center of the bar has inscriptions of the nation of issue, weight, metal content, and purity for the bar. Above this is the Argor-Heraeus logo, with the assayers mark at the bottom of the bar.

On the reverse field of 5 Gram Platinum Bars is a repeating design pattern that is set at an angle. Each of these individual little emblems is a simplified version of the Argor-Heraeus logo. This image includes only the AH initials of the mint with a circle around them. There are numerous of these logos in the design field.

These 5 Gram Argor-Heraeus Platinum Bars are available to purchase in brand-new condition. Each bar comes with its own tamper-evident blistercard that includes a signed assay from the mint. The assay card authenticates the major details of the bar that include the weight, metal content, and purity of the bar.

Please feel free to reach out to JM Bullion with any questions at 800-276-6508. Our team is also available on the web using our live chat and email address features.