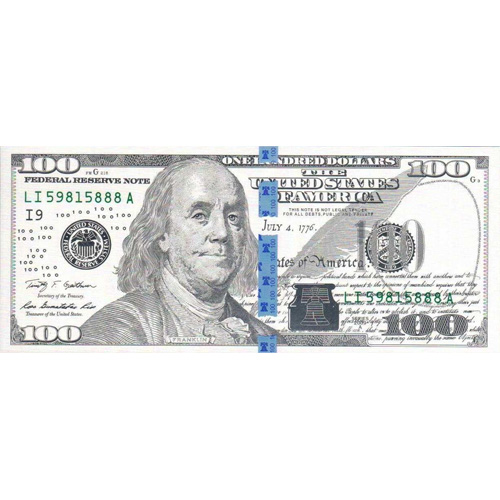 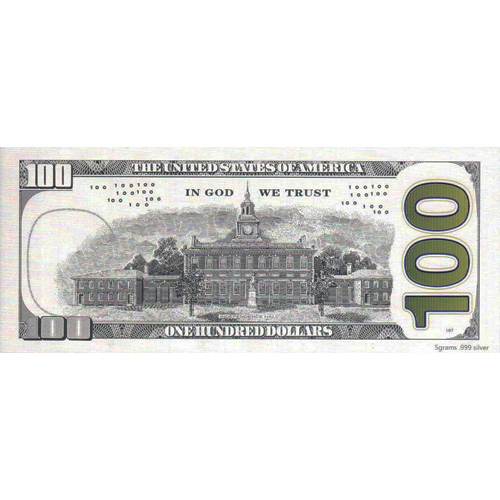 The largest denomination bill in the US dollar that is still in circulation today is the $100 bill. Featuring the effigy of Benjamin Franklin, one of the most important Founding Fathers, the bill has been around since 1914. In this distinctive release, the $100 bills imagery has been produced on a beautiful silver foil for collectors and investors. Today, 5 Gram $100 Benjamin Franklin Replica Silver Notes are available to you online at JM Bullion.

All of the 5 Gram $100 Benjamin Franklin Replica Silver Notes in this listing come to you with protective currency sleeves. These beautiful silver notes accurately replicate the images of the modern Federal Reserve Note, including replications of the security features the Treasury includes in the notes. However, these notes are collectible silver items and have no legal tender status.

The obverse of 5 Gram Benjamin Franklin Replica Silver Notes includes a portrait of the famous Founding Father. When the US introduced the Federal Reserve Note in 1914, the $100 bill was the largest denomination, at first, and included a right-profile portrait of Franklin. The current designs in use on the $100 bill, as featured here, were redesigned in 2009.

On the reverse side of 5 Gram $100 Benjamin Franklin Replica Silver Notes is a depiction of Independence Hall. Located in Philadelphia, Pennsylvania, the building is central to the history of Americas founding. It was in this building that the Founding Fathers signed the Declaration of Independence at the start of the American Revolution. It was also the site of the adoption of the United States Constitution following Americas victory in the Revolutionary War against the United Kingdom.

Please feel free to contact JM Bullion with any questions about silver for sale. You can call us at 800-276-6508, chat with us live online, or email us directly.

Ryan from - October 21, 2021
"The premium is very high but it makes great (relatively cheap) gifts for family and friends. "