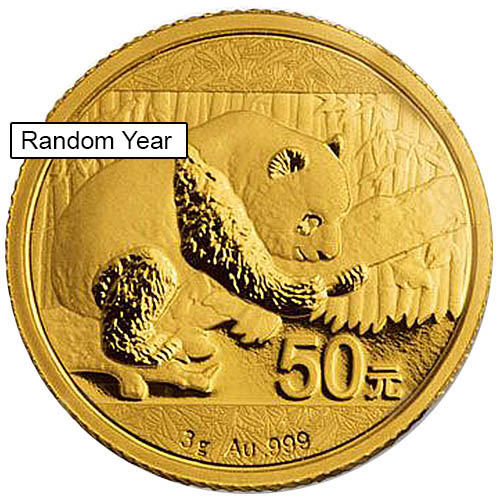 Chinese Gold Panda coins are a popular choice among gold buyers. The official gold bullion coin of the Peoples Republic of China, these products are available annually in five different weights. Since 2016, the Chinese Mint has issued the coins weighed in Grams rather than Troy ounces. The 3 Gram Chinese Gold Panda Coin is currently available to you for purchase online from JM Bullion.

When the Chinese Gold Panda was issued for the first time in 1982, the coins were available in 1 oz of gold and three fractional weights. Those original coins were issued as 1 oz, oz, oz, and 1/10 oz coins. Starting in 2016, the Chinese Mint switched the weights for its coins to Grams in a move it said was designed to bring the coins in line with the nations use of the metric system.

These 3 Gram Chinese Gold Panda coins have been available from the Chinese Mint since 2016 and replaced the previously issued 1/10 oz coins. While the coins have the same face value of 50 Yuan, there are differences in the precise weight and diameter of the coins following the conversion to Grams.

On the obverse of all 3 Gram Chinese Gold Panda Coins is the structure known as the Hall of Prayer for Abundant Harvests. It is the largest building within the Temple of Heaven complex, which itself is one of four prominent temple complexes in Beijing. The others include the Temple of the Sun, Temple of the Earth, and Temple of the Moon.

The reverse side of 3 Gram Chinese Gold Panda coins features designs which are ever-changing. The Giant Panda species is always the primary focus of the design, but the exact depiction is new each year.

The 3 Gram Chinese Gold Panda coins you can purchase here today come from random years, with possible date marks including coins struck from 2016 onward. Additionally, the coins have been unsealed previously from their original Chinese Mint packaging, but do ship to you inside of generic protective packaging.

We encourage JM Bullion customers to contact us with questions at 800-276-6508. You can also connect with us live online using our live chat and email address.