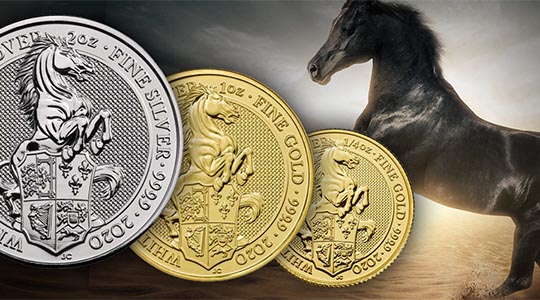 Once again, Jody Clark created the design of the White Horse of Hanover. The reverse of the new 2020 Queen’s Beast White Horse bullion coins feature a design of the White Horse of Hanover standing on its hind legs rearing up behind the shield that makes up the Royal Arms of England carried by King George I. The shield is a quartered design with the Three Lions of England and Lion of Scotland in the first quadrant. The second quadrant bears the fleur de lis denoting the British monarch’s claim to the French throne. In the third quadrant, the Harp of Ireland is featured to represent Northern Ireland. During the reign of King George I, George II, and the early period of George III, the Arms of Hanover featured in the fourth quadrant.

On the obverse side of the 2020 British Queen’s Beast White Horse Coins is the fifth-generation portrait of Queen Elizabeth II. Clark designed this image as well, creating this portrait of the Queen in 2015. It has featured on British denominations since 2016 and features the monarch in right-profile relief. In this design, Elizabeth II wears the George IV State Diadem Crown. This crown has an impressive 1,333 diamonds weighing in excess of 300 karats. The background field of the coin includes the guilloche design element.

As with all other issues in the Queen’s Beast Series, the White Horse of Hanover is first available in 2 oz silver bullion, 1 oz gold bullion, and 1/4 oz gold bullion coins. In the months to come, the Royal Mint will also make the White Horse of Hanover coin available in 10 oz silver bullion and 1 oz platinum bullion options, as well as the proof versions of the coin in gold and silver.

King George I was the first British monarch from the House of Hanover. He came to the throne following the death of Queen Anne as the closest relative in the bloodline eligible for the throne. Before coming to the throne of England, George also held the title of Elector of Hanover. Prior to 1714, the Royal Arms of England had a quartered shield with the French fleur de lis in the second quadrant and the Harp of Ireland in the third quadrant. The first and fourth quadrants featured the Three Lions of England and Lion of Scotland “impaled” together. This reflected the Acts of Union 1707 that merged the two into the kingdom known as Great Britain.

With George I’s ascension to the throne, the fourth quadrant depiction of the combined Three Lions and Lion of Scotland design was replaced with the Arms of Hanover, marking the start of the House of Hanover’s control over the crown of England. The Royal Arms of King George I were carried throughout his reign and that of his son, King George II. His grandson, King George III carried these same arms through 1801. In 1801, the Acts of Union 1801 resulted in the removal of the French fleur de lis from the second quadrant. The Lion of Scotland resumed its position alone in the second quadrant with the Three Lions in the first and fourth quadrant. The Arms of Hanover were then featured “inescutcheon” at the center of the shield.

Continue Your Queen’s Beast Series with the White Horse

The new White Horse of Hanover bullion coins from the Royal Mint are available courtesy of JM Bullion. If you have any questions, our customer service team is available to help answer those inquiries. You can call us at 800-276-6508, chat with us live online, or email us directly. You can also follow our blog each week for in-depth information on upcoming releases and follow us on Facebook for daily updates and chances to win silver and gold in our spot price guessing contests.