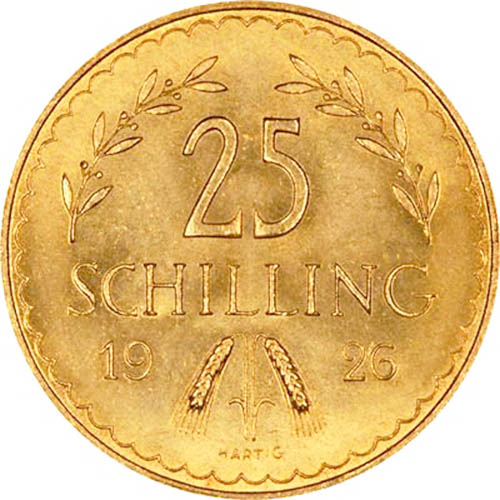 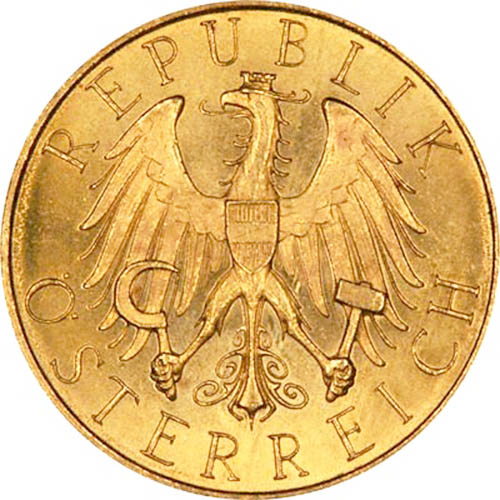 From 1926 to 1938, the Austrian Mint issued gold schilling coins in the 25 schilling denomination. In general, schillings were issued as the official national currency of Austria in the inter-war periods between the end of World War I as the new republic got back on its feet following the breakup of the Austro-Hungarian Empire and the invasion of Austria during World War II.

On the obverse of all the 25 Schilling Austrian Gold Coins, you’ll find the coat of arms for Austria with the eagle design. The eagle is featured at the center of the coat of arms and it holds two significant tools in its claws. The hammer in one claw represents the industry of Austria, while the sickle represents its agriculture.

The reverse of 25 Schilling Austrian Gold Coins primarily features edelweiss framing the face value of “25 Schilling,” along with a year of issue. Below this design on the coins is the name “Hartig,” which is a nod to Arnold Hartig, the famed Austrian medalist who worked closely with the National Bank of Austria. From 1935 to 1938, these 25 Schilling Austrian Gold Coins featured St. Leopold, the patron saint of the nation of Austria.

The Austrian Mint is one of Europe’s oldest mints. It was originally founded in 1194 by Duke Leopold V with 15 tonnes of silver paid to him as ransom by Richard the Lionheart of England.

We encourage JM Bullion customers to reach out to us with questions at 800-276-6508. You can also connect with us online through our live chat and email address.