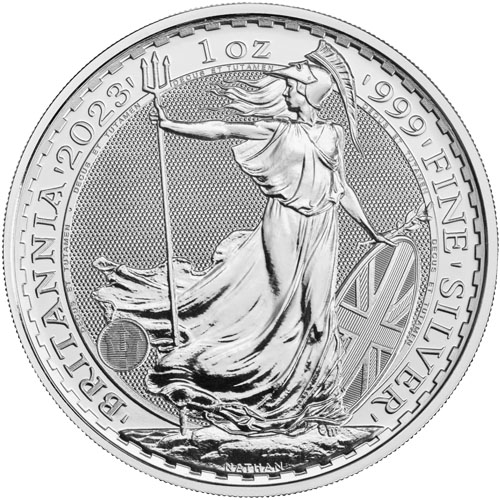 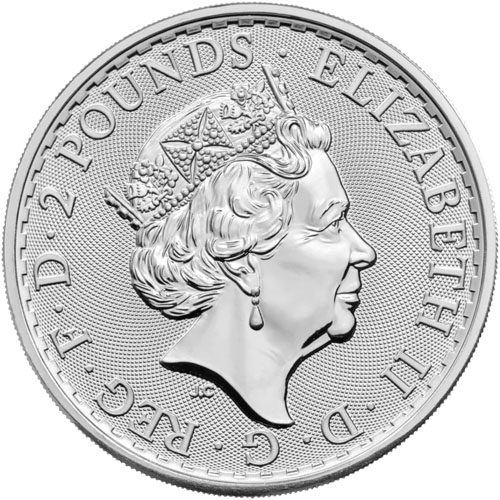 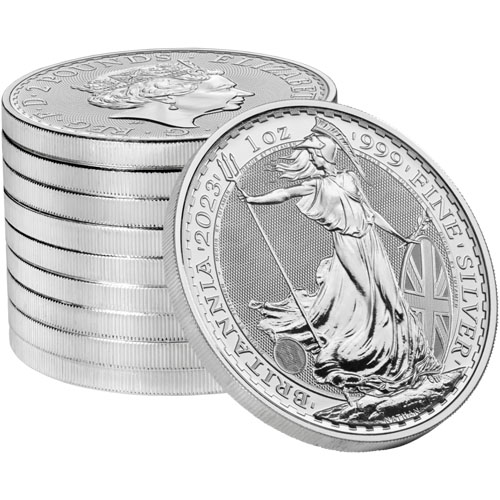 Any quantity available for $4.49 per coin over spot!
Add to WishlistLog In to add this product to your Wishlist
Free Shipping on $199+ Orders

The 2023 release of the British Silver Britannia is one that you won’t want to miss. With the recent passing of Her Majesty, Queen Elizabeth II, the 2023 date mark in this series will be the last to feature the effigy of Britain’s longest-reigning monarch. In fact, 2023 Queen Elizabeth II Silver Britannias will only be struck for a few weeks before the series transitions to coins with a new King Charles III portrait, so there’s no time to waste. Right now, 2023 1 oz British Silver Britannia Coins are available to purchase online from JM Bullion.

Each 2023 1 oz British Silver Britannia Coin available to you here at JM Bullion comes in Brilliant Uncirculated condition. The coins are housed individually in plastic flips. Multiples are available in acrylic tubes of 25 coins or Monster Boxes of 500 coins. Each Monster Box holds 20 tubes of 25 coins each.

On September 8, 2022, Queen Elizabeth II passed away at the age of 96. Her son, Prince Charles, immediately ascended to the throne as King Charles III. Elizabeth II enjoyed a record-setting reign that saw five portraits of the Queen grace the fields of British and Commonwealth coinage. These are the final Silver Britannias with her effigy.

The obverse of the 2023 British Silver Britannia comes with a portrait of Queen Elizabeth II in right-profile relief. Her Majesty is shown here in the design from Jody Clark that was created in July 2015. It depicts the monarch at the age of 89 wearing the George IV State Diadem Crown.

On the reverse side of 2023 1 oz Silver Britannia Coins, you will find the image of Britannia. Created in 1987 by Philip Nathan for this series, it depicts a powerful image of Britannia as a guardian of the British Isles. Wielding a trident in one hand, she wears a Corinthian helmet and carries a shield with the Union Jack emblazoned on it.

Recent security enhancements for the coin include lines in the background that create a sense of motion in the waves, a latent security element, tincture lines on the Union Jack, and micro text around the inner design field.

Raymond from CA - November 24, 2022
"Thanks, JM Bullion for the great price on the Black Friday sale. smooth, easy transaction as always 5*****"