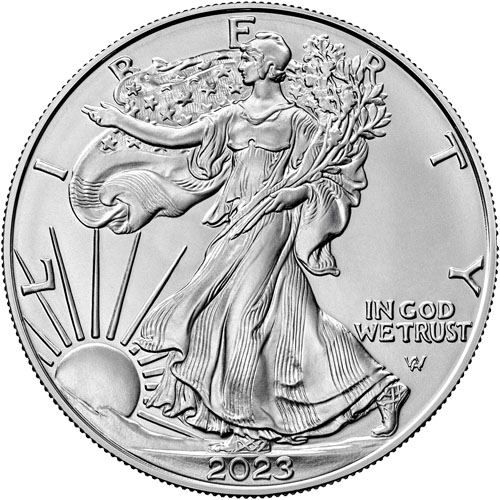 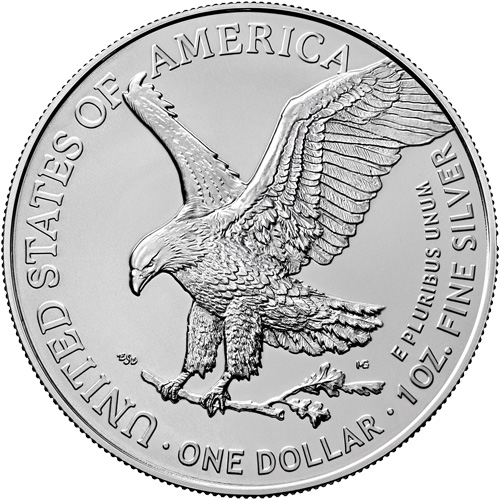 By the 2010s, the American Silver Eagle had established itself as the best-selling silver coin in the world. Amidst the Great Recession and the geopolitical instability of the late 2010s, the Silver Eagle continued its dominance, setting one mintage record after another during the decade spanning 2008 to 2018.

Walking Liberty graces the obverse of the 2023 1 oz Silver Eagle Coin. This effigy of Liberty from Adolph A. Weinman was created in 1916 and originally featured on the US half dollar until 1947. It depicts Liberty’s full-length figure in left-profile relief as she walks toward the sun draped in the American flag.

For the reverse design of 2023 American Silver Eagles, the US Mint offers the new soaring eagle design for a third consecutive year. Introduced in mid-2021 and designed by Emily Damstra, this visual shows the bald eagle in left-profile relief as it descends into view with a large oak branch in its talons.

These 2023 1 oz American Silver Eagles are in Brilliant Uncirculated condition. The coins in this listing come in plastic flips for individual purchases, with multiples of 20 in acrylic tubes and multiples of 500 in Monster Boxes. Each Monster Box holds a total of 25 individual tubes of 20 coins each.

JM Bullion customer service is available to assist you at 800-276-6508. We are also available online using our live chat and email address features.