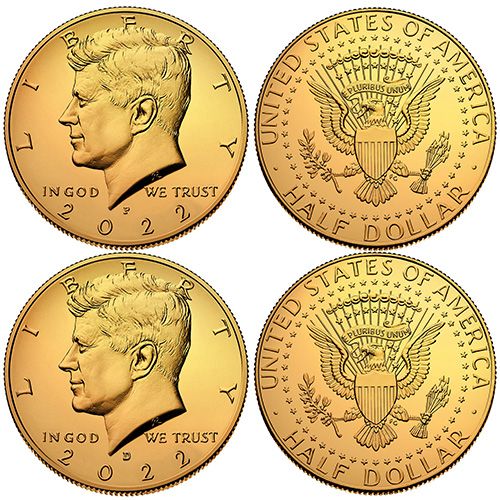 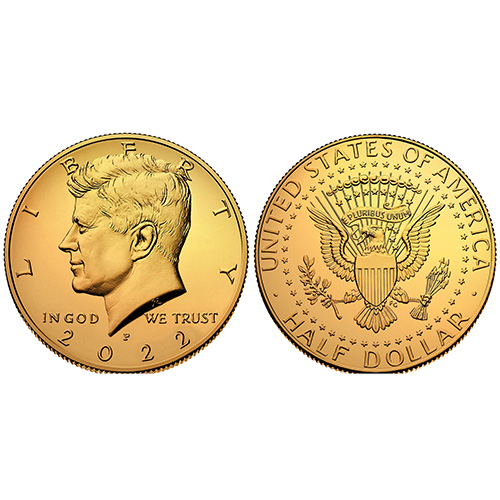 The Kennedy Half Dollar is one of the most popular circulating coins in the US Mint’s history. Not only do these coins feature one of the most beloved of all American presidents, but they also have the largest weight and diameter of any US coin in circulation. Now fans of the Kennedy Half Dollar have a chance to own a unique set produced by the Merrick Mint layered in 24-karat gold. Today, 2022 JFK Half Dollar Sets with gold plating are available to purchase online from JM Bullion.

When you order 2022 Half Dollar Sets in this online JM Bullion listing, you will receive a pair of coins with genuine 24-karat gold plating. These coins have been produced by the Merrick Mint and will arrive housed inside acrylic capsules. Included with your purchase are two plastic stands for displaying the coins and a Certificate of Authenticity.

The United States half-dollar has a storied history that began in 1794. Prior to the Kennedy Half Dollar in circulation today, one of the most esteemed 50-cent pieces was the Franklin Half Dollar. These coins were produced between 1948 and 1963 and featured a portrait of Benjamin Franklin on the obverse and the Liberty Bell on the reverse. Following the assassination of John F. Kennedy on November 22, 1963, the Kennedy Half Dollar was created. It remains in circulation to this day.

On the obverse of each coin in these 2022 JFK Sets is a portrait of John F. Kennedy. This cherished design was produced by Gilroy Roberts, Chief Engraver at the US Mint from 1948 until 1964. Beneath the portrait, you will find the coin’s mintmark. Inscriptions on the obverse read Liberty, In God We Trust, 2022.

The reverse face of the coins in these 2022 JFK Half Dollar Sets features a modification of the Presidential seal. This image by Frank Gasparro is based on his 1961 Presidential medal design. In it, we see a heraldic eagle clutching in its talons both an olive branch and arrows. It is surrounded by a ring of 50 stars, one for each state. There are reverse inscriptions as well reading United States of America, Half Dollar.